I am still in disbelief that Azalea is now 3 weeks old. It is absolutely mind-boggling. How does time do that? Ugh.
How are we doing? I know that a lot of you have been asking and I've been pretty silent about it on social media for the most part.

The truth is, I am exhausted. Antonio is forever telling me to sleep when the baby sleeps (as does every single baby advice piece)...but my question is: how the **** does one do that on the regular?! Azalea isn't the only little chick that I have. I have a literal house full of them! And, quite frequently, my second (third, fourth, etc) wind has hit and I am going about at full speed (on fumes) when Azalea falls asleep. And I am not one who can force myself to go to sleep. But there are days...like yesterday...when sleepiness hits me like a locomotive. Azalea was sleeping in my arms and I literally just fell over and slept for about an hour. Mahri said that she couldn't believe I had fallen asleep that quickly and had been assuming that I was still watching Ancient Aliens with her. Oops. hahaha 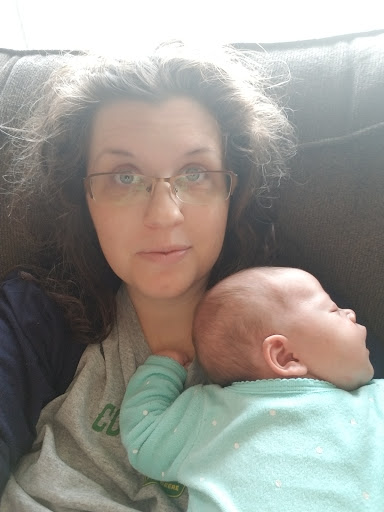 For the last couple of nights, when Azalea wakes up hungry, I begin nursing her...only to realize (who knows how much later) that I actually did NOT nurse her. But, instead, fell back to sleep and dreamed that I nursed her. ::face palm::

I am very excited and relieved that after all of the obstacles that Isabel and I encountered during our breastfeeding journey together, it has been smooth sailing with Azalea. Even my doula and midwife commented on how well Azalea took to the breast. She has a great latch...which is actually something I struggled with with pretty much every one of my nurslings. She even got my right breast, the one I had a lumpectomy on years ago that none of my chicks ever seemed to want to nurse from...well, she got it working! After 8+ years of babies refusing it, I didn't even think it was possible to nurse from it anymore! She actually nursed so much in her first days that she gained over a pound and a half in her first 2 weeks! I should mention that I had not yet introduced a pacifier to her at that point and I nurse on demand. So I was pretty much nursing round-the-clock to see those results. She is showing signs of silent reflux, so we're keeping an eye on that. I have a very strong letdown (over supply?), so much so that I typically nurse her from a reclined position whenever possible.

For all the exhaustion and craziness that comes with a family of six kids, I am absolutely in love with my life! I wouldn't change anything...even if it means that I might not sleep for the next two years.

And now I am going to end this post fairly abruptly. Isabel and Azalea are both asleep (Azalea is asleep in my arms) and the house is quiet. So I am going to enjoy the tranquility for as long as I can!

How are all of my mama friends who have recently had babies doing?! Are you all just as sleepy as I am?! hahaha