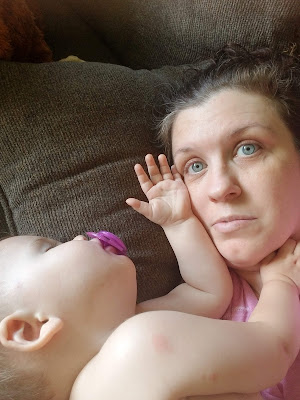 I think this picture of Isabel and I sums it up nicely:

My tummy is getting so extremely large. Those of you who have known me through at least a few of my pregnancies know that my stomach gets REALLY BIG, REALLY FAST.

Most people say that it's because I've been pregnant so many times...and usually that's what I joke, too. But the truth is, I have been like this with every single one of my pregnancies. I remember getting into a very enthusiastic argument with an older gentleman at the laundromat when I was pregnant with my first. He was quite certain that I was having twins. I had already had a couple of ultrasounds at that point and knew beyond a shadow of a doubt that there was only one baby in there. But he continued to insist that I was enormous and therefore there must be more than one baby.

I can't argue it too much because I gained a whopping SIXTY POUNDS with my first pregnancy!! 60!!! I was 103 when I went in for my first prenatal visit and was 163 on the day that I delivered.

BUT I gained nowhere near that with my subsequent pregnancies and my stomach as always been quick to expand. I love it, truth be told. There's not too many "is she pregnant or does she just really like tacos?" looks that I get because it's pretty obvious early on that there's a baby in that thar hill! hahaha 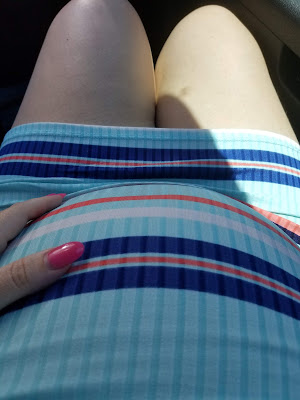 So...anyway...let's catch up with all that's been going on over the last few weeks with Baby Mistletoe, okay?

Still not a huge appetite increase. For awhile, I was craving Popeye's Spicy Chicken but that only lasted a week or two. Then I was back to the only thing sounding really good ever was fresh fruits, sometimes veggies, and pasta.

Unfortunately for my efforts to watch how much weight I gain with this pregnancy, we discovered THE most delicious authentic Italian restaurant in Buford, Georgia. The baby adores it and so do I (and actually the entire family, so it's bonuses all across the board!). We've been there twice in the last 2 weeks...probably it was more like twice in a week, maybe a week and a half...but the thing is: it's almost an HOUR away, depending on traffic! But cravings don't care about that sort of stuff, do they? I really must make an honest effort to find delicious Italian food a bit closer to the house.

I was having really bad insomnia at the beginning of the pregnancy but that seems to have mostly subsided, thank God! I was waking up around 5 am every morning...desperately try to go to sleep for an hour...then Isabel would wake to nurse at 6 am...I'd try to fall back to sleep but had to be up for work at 7 am. It was killing me.

Speaking of Isabel nursing, she's been going back and forth. I am fairly certain that my milk has mostly "dried up", though I do have a little. Just a few weeks ago, she was nursing every couple of hours and then seemingly without warning, she cut WAY down. She was nursing once...maybe twice...in a 24-hour period and pretty much cutting out all nighttime nursing. I've cried about it some because I am mourning that relationship that she and I shared. But I am also extremely grateful that we got to have it (despite all of the challenges, especially in the early days) and that it has lasted 15 months. I was also starting to get nervous because I only have one truly functioning breast due to a lumpectomy I had when Mahri was just a few months old. So as much as I love the idea of tandem nursing, I just didn't see it very feasible (or good for my sanity!) when I only had one breast to offer two babies.

I've been experiencing mild heartburn as well as occasional headaches.

I think I've been keeping my mood swings pretty well in check, for the most part. Well. Kind of. hahaha

I have yet to buy anything for the baby. All I've bought thus far is a fish net scoop thing for our home birth. That might sound silly...but seriously, I think I ordered that sucker from Amazon the second that two pink lines showed up on that pregnancy test. See, the fish net is to get out...things that happen...while laboring in the water.

Anyway, my BIGGEST fear with my water birth with Isabel was that I was going to poop in the water. And I did. But my midwife assured me that they could easy peasy scoop it out with a fish net and it would be gone before anyone ever knew it was there. So that's what I was counting on. It was also among the two things that I asked my husband to buy for the birth. (the other thing was the adaptor for our shower head to attach the hose to fill the birthing pool) He assured me he got it. It was ready to go for the birth. So the birth is happening. I poop in the water. He brings in an ENORMOUS pool cleaning net!!!!! The midwife and doula just stared and said "Dude. We can't use that. The poop stays."

And stay it did.

And that is why my very first--and only thus far--purchase for this baby is a small fish net.

There will be no lingering poop in the water with me, ya'll.

We went for an ultrasound the other day to make sure that Baby Mistletoe is happy and healthy in there. Since we don't want to know the gender, there was no peeking at that region at all. Baby was sleepy...the ultrasound tech said that it was because I hadn't eaten lunch before the visit (no time what with trying to wrap up work and get 5 kids out the door in time....plus find parking in downtown Atlanta), so there were no great photo ops given to us by Baby Mistletoe. S/he yawned once and it was adorable but over before the tech could snap a pic.

Now for the boring, yet important, medical details:

At my last prenatal visit, my blood pressure was great at 112/72

I've been going to the chiropractor every 2 weeks and that helps so much with back and hip pain! I highly recommend going to a SKILLED chiropractor if/when you are pregnant! 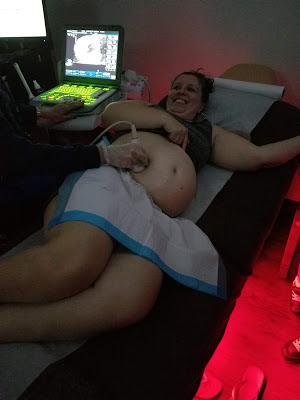 I look like I have 12 chins in this picture but you can quite clearly just what I'm talking about when I say that my belly gets big. This is at 20.5 weeks. (seriously, Mahri, thank you for capturing this amazing moment!! I love you!!)

Well, let me get going...Isabel is in the next room throwing a temper tantrum, so I need to go see if I can diffuse the situation a bit.

How have all of you guys been?!!