We were happily zooming down the highway on our way to the chiropractor.

I had been reading "The Secret" and practicing the Law of Attraction and I remember consciously making an effort to tell myself that it was going to be a wonderful day.

I wish I could remember what we were all talking about. I'm sure we were singing aloud to a song on the radio and observing the gray overcast day.

As we were pulling off on the exit we needed, Christian and I were stunned to see a man and woman on the side of the highway, just at the lip of the exit. They were yelling.

And he was hitting her. Hard.

I didn't think twice as I veered to the side of the road. My fingers tripping over the touchscreen on my phone as I dialed 911. My voice was quaking and I was scared. What could I do to help her if the police didn't get there in time?

I glanced in my side mirror and saw her running towards my Suburban. She was screaming for me to call the police as she approached my window. I reassured her that I was on the phone with them at that very moment.

I looked in the mirror and saw the man making his way towards us, walking up the off ramp that I was parked along the side of.

I didn't hesitate for a minute when I told her to get in. Get in right now!! He is coming after you! Get in my car NOW.

The emergency dispatcher on the phone was trying to get me to talk to her. I was torn between reassuring the battered woman next to me and giving a more descriptive account of our exact location to the dispatcher. I explained to her that the woman was in the vehicle with me. Yes, I am on the off-ramp. Yes, I am sure that I am heading towards Alabama and not Atlanta. She had me tell her the stores that were next to me.

The woman next to me was desperately trying to get out of my Suburban. She was afraid that the man, her abusive companion, was going to harm her car, as he had since turned around and went behind her car. The woman clawed at my locks, unlocking the door, but each time I pressed the Lock button again. I was not going to let her run back there and get hurt more, if I could help it.

The dispatcher told me to continue up the off-ramp and she promised there was an officer waiting for us. Just yards away. Just go. Go now. Do not worry about the man who was again making his way towards my Suburban.

I promised the scared woman that the police would help her. That the man couldn't hurt her car--her new car that she was so proud of--since he was following my creeping Suburban up the ramp. He jumped over the divider and, for a minute, we were afraid that he was going to run into the woods. But then he crossed the divider again and began jogging towards us.

As I neared the end of the off-ramp, I saw the officer waiting for us. A large broad man that looked like Safety. He would surely keep this crazy man from harming us.

To be honest, I wasn't worried about having this strange woman in my vehicle with my kids and I. Later, as I told him the story, Antonio told me that I needed to begin carrying a weapon. What if this had been a setup the entire time? I had a car full of children to worry about. But this woman was in danger. She needed my help. How could I have left her on the side of the road?

I pulled off the exit and guided my car in front of the parked police car. I parked and jumped out with the woman. The man was still coming towards us. The officer promised that he would not let the man hurt us. He handed me a paper and asked me to fill it out since I had been a witness, then he walked over and met the man and put him in handcuffs. 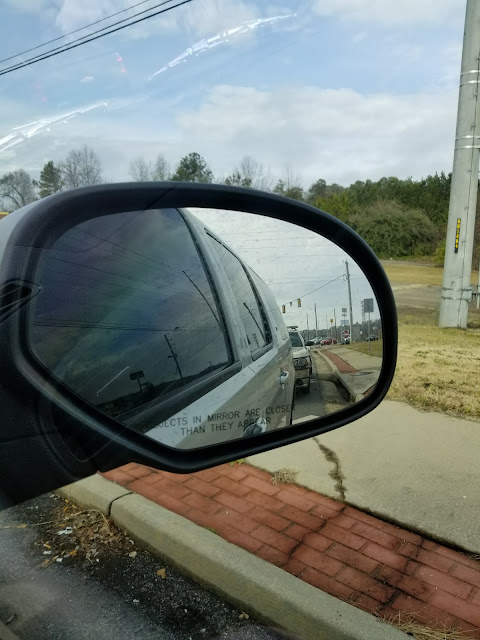 The couple began arguing and yelling at each other. She cried to me and told me that they had a five-month old baby girl at home. He was the baby's father. My heart sunk. This world can be full of such heartache.

The girl requested to be checked out by an ambulance and the man was in handcuffs. My report was filled out. I began walking towards my car to check on my kids. That's when I noticed that it looked like I had...oh no....did I park in a puddle of black pudding?...no...please...don't let it be what I think it is...I remember thinking that....all of it flooding my brain....please no.... But it was. My front right tire was completely flat. A puddle on the ground. 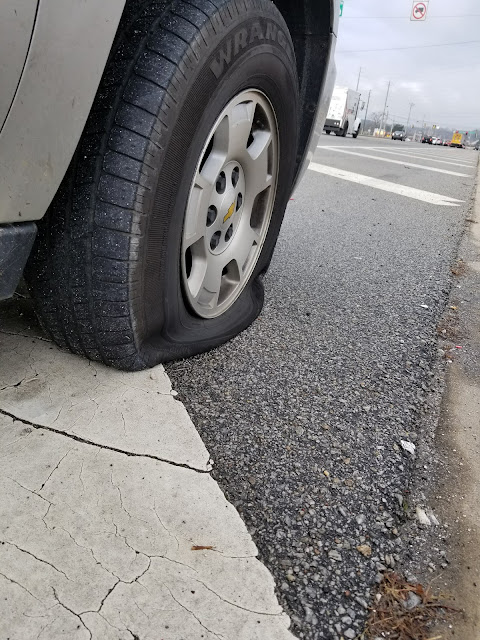 I called Antonio. He didn't answer. I called again and again.

The patrolman asked if I wanted him to call a wrecker to tow my car. Of course I didn't. Please just let this not be real....

But it was. I saw a tire shop just ahead...but I didn't want to drive on my rim. The ambulance driver sidled up to me and hunkered down, examining my dilemma.

He found a huge chunk of glass. I must have run over it as I pulled to the side of the road to help her. It had burrowed deep into my tire and rendered it useless. 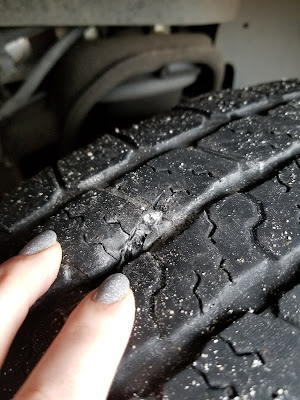 I told him that maybe I should take it to the tire shop up ahead but he grimly shook his head and said in a conspiratorial voice "I wouldn't go there, ma'am. That's basically a rent-a-tire place. No one you want to mess with" and then he went back to speak with the officers about the injured woman.

In the end, the girl said she was okay and had the ambulance drive her back to her car and she went away. And there I was, left to sort out the mess that had become of my day. I called the chiropractor and cancelled our visit.

I finally reached Antonio and he and one of our employees came (an hour after I had called) and changed my tire for me. Then my own personal prince, Antonio, my hero, took us all out for lunch and peanut butter sundaes to help us forget about all of the chaos we had just been through.

I have had some friends say that I was brave to stop and help. But I don't think I did anything special. I simply did as one would do when they see someone who needed help. I stopped and helped. That's what we are here for, isn't it? And I taught my kids that, through it all, love will always prevail.
Labels: Helping Others