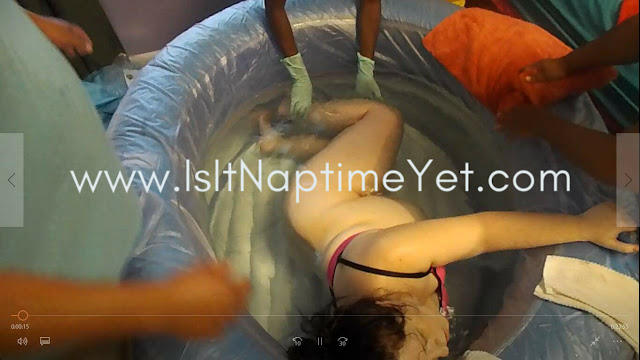 I love this video down at the end of this post. It was an amazing birth caught on camera by Napa Valley Midwives. It shows a very important fact (besides the obviously amazingly beautiful birth!!)...

Birth is not something to fear.

Let me answer that with more than just a Yes or No...

You see, when you are afraid and/or uncomfortable, nervous, etc, your body tenses up and expects pain. And pain WILL most definitely happen. With my first 4 labors, I felt a lot of pain... First off, everyone loves to remind you of how badly it hurts. And I was in a strange environment (the hospital), surrounded by strangers and scary looking devices. Hooked up to monitors and devices. I was scared and uncomfortable. And in a great deal of pain.

In preparation for my first home birth (my 5th baby), I cannot tell you how many times people brought up the pain factor. All of them were mother's who had birthed in a hospital with epidurals.

But my friends and acquaintances who had given birth sans pain killers (many with home births), kept trying to assure me that it was NOT going to be this excruciatingly painful experience.

Honestly, I thought they were full of crap.

But the more I researched it, especially Ina May Gaskins' wonderful words, the more I came to understand that pain is *mostly* how you perceive it. She instructs you to never think of contractions as "painful" but, instead, to view them as strong sensations that ebb and flow.

This really isn't something that you can just jump into, in my opinion. Like, no preparation, just decide that your birth isn't going to hurt (surface thoughts) and then just blindly head into labor. At least not if your brain has already been filled with the images of pain. Or have birthed in a hospital with an overworked staff that relies heavily on moms being medicated.

I picked the mantra "I am not afraid. I was born to do this." to continuously meditate on throughout my pregnancy.

I worked hard to push out the thoughts of fear...even limiting contact with anyone who was insistent on telling me how much I was going to be hurting and regretting my decision to birth at home.

People. Seriously. Life is too damned short for that type of negativity! It helps absolutely NO ONE. If you can't offer absolute love and encouragement then keep your mouth shut.

As I got closer to my due date, I began realizing that I wasn't nearly as afraid as I had been for my hospital births. I was excited!

The morning I went into labor (my bag of waters actually broke on its own...I've never had that happen!), I was a combination of nervous and excited. But not afraid at all.

And guess what? I wasn't in this horrendous pain that some had swore I would be in. When my midwife and doula arrived and checked my dilation, I was just 4 cm. I was discouraged but relaxed.

I walked to the kitchen immediately after being checked to make a pot of coffee....and that was it, baby!!! I began having contractions as soon as I got to the kitchen. My doula turned me right back around (I didn't even get the chance to make the coffee!) She told me that my contractions were 2 minutes apart. It was show time!! I remember laughing at how fast it was coming.

My doula had my husband doing the "double hip squeeze" during my contractions as they got stronger. That took away almost 100% of the pain.

I won't lie: near the end it did hurt. Because I had back labor. It hurt a lot in the last few minutes, as her head pushed against my backbone as she descended. (This does not happen during all births. I had it during my first labor and the epidural didn't even help a bit anyways for back labor.) But there was no yelling. No screaming. Not like you see in the movies or on tv shows. It was extremely peaceful in between contractions. Because I focused on relaxing.

I got scared at the end. I had such traumatic births previously, in terms of tearing and episiotomies...we're talking 3rd degree episiotomies... So, mentally, I couldn't get past that. And that caused me to tense up and hold back. But I am so extremely positive that if I had just let go (and not had back labor!! haha), my birth would have ended like this video!!

And, should I ever get pregnant again, I will most definitely be having another peaceful home birth!!

Watch this amazing video!! This mama is amazing!!