Please note that I starting writing this a few weeks ago but never got the chance to finish it until now. This all took place about 2-3 weeks ago...so watch for more updates coming your way (hopefully) soon!! xoxo 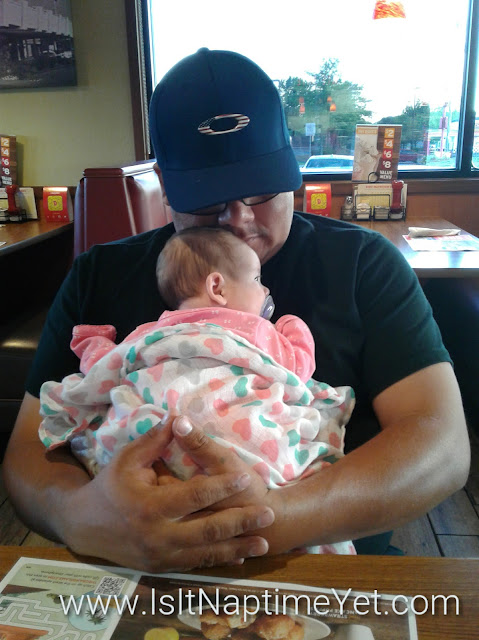 I had wanted to do a video update about Isa's and my breastfeeding journey, however, time does seem to slip away from me before I seem to pick up the camera.

If you watched our 1 month update video HERE, you know that Isabel's doctor has been slightly worried about her weight gain. Mainly that it seems to be very slow.

Her doctor asked me if I would be willing to meet with one of the lactation consultants that they have on staff at the pediatrician's office (have I mentioned how much I LOVE this office?!!) and, I'll admit, at first I was wary. I have been breastfeeding for over 4 years. I really didn't feel like meeting with a LC like I was some kind of newbie. I know how uppity that sounds and I don't mean to...but we all have things that we are proud of...my breastfeeding "skills" are one of my things. ::shrugs:: But I do want to make sure that I am doing all that I can to ensure Isabel is happy and healthy.

So I agreed to meet with the LC (Lactation Consultant).

My appointment was NOTHING like what I was thinking! Molly, the LC that I met with, was so extremely friendly and helpful! Here's how our appointment went....

As soon as we came in, she weighed Isabel. Then she asked me if I would be comfortable removing my shirt to nurse Isabel skin-to-skin. I had no problems with that, so once I removed my shirt, she had me lie down on the couch in the LC room.

She placed Isabel on top of me, not really near my nipple, and we watched. Isabel fairly quickly began scooting herself across my body and found my nipple all by herself! She was able to latch on initially and nurse a bit but soon "lost" her latch and struggled to relatch.

I sat up and latched her on and she was, once again, able to nurse for a few minutes before losing her latch.

We tried different positions to help her regain her latch...all to no avail.

She took a look in Isabel's mouth and concurred with Isa's doctor: posterior tongue tie.

But then she found something else interesting: Isabel has a high palate.

Meaning the roof of her mouth is higher than normal. That, paired with the tongue tie, poses a big problem with breastfeeding. See, when a baby nurses, their tongue basically pushes the mother's breast (the part inside of baby's mouth) against the roof of their mouth. It's kind of like a wave motion and that's how the baby nurses.

Molly said with resignation that she rarely EVER promotes using a nipple shield except in extreme cases. But she feels that Isa is one of those cases. A nipple shield is what it sounds like, sort of...it's like a shield made out of super thin silicone that's shaped like a nipple. It goes over the mother's actual nipple to help baby get a better grip, so to speak; to help them achieve and maintain their latch. So we tried nursing with a shield.

It didn't work. She just screamed and screamed, mainly out of frustration.

Though she wasn't able to nurse for very long, we weighed her again, just to see how much milk she had drank. It ended up being over 2 ounces.

Molly had a few suggestions to help Isabel get more calories, though:

I can nurse, as usual, but also add in a couple of pumping sessions.

I can use a Haakaa to collect breast milk from the other breast while Isa is nursing on the other.

I can begin nursing Isabel anytime she even begins to remotely show interest in nursing. Even if she's not fussing or crying. Basically, if I see her lick her hand (a classic sign of looking for milk, even if just for comfort), offer her the breast.

I can also massage and sort of manually express milk while she's nursing to encourage the fattier hindmilk to reach Isa faster.

She also recommended scheduling an appointment with a well-known and oft-recommended pediatric ENT here in Atlanta to get her frenulum clipped (to get rid of her tongue tie). She said that he is typically booked a month in advance, so that I could just schedule the appointment and just wait and see what happens at Isabel's 2-month Well Child Checkup appointment in 2 weeks to see if there is any improvement in her weight.

As the final part of my appointment, Isabel's pediatrician came in to review and give his ultimate decision on what he recommends. Molly went to powwow with him first, to try and convince him not to tell me to supplement with formula.

When he came in, he was all smiles. He said that there was a definite improvement in her weight gain, albeit a very small improvement. She went from gaining a mere .5 oz per day to .7 oz!

But he said that he was still happy that there was an increase in her weight gain...he just would like to see her to get up to 1 oz per day.

He did not suggest supplementing with formula. In fact, he said that she was looking a little more "filled out" than she did at her 1 month Well Child visit.

He also said that he was not convinced that she needs her tongue clipped. Ironically, Molly said that out of all of the doctors that she works with, he's the most on-board with understanding the impact tongue-ties have on the breastfeeding journey. (She said that many doctors feel that tongue ties really aren't a "thing". What?!) He actually said that he did not feel that I needed to take her in to have it clipped.

That made me happy. I really didn't want to have it done, nor did Antonio. But we would definitely let the doctor's opinion weigh heavily in our decision making. And he said that he didn't think it needed done! ::whew::

So now the game plan is for me to just nurse super frequently and see if she can get her calories in that way. Hopefully we will see a difference at her next doctor's visit!

Heya i am for the first time here. I came across this board and I find It really useful & it helped me out much. I hope to give something back and aid others like you helped me. netflix login member
April 21, 2018 at 2:57 PM