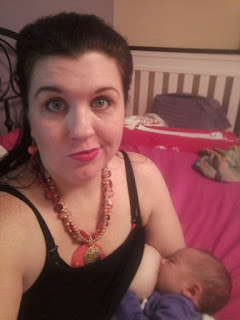 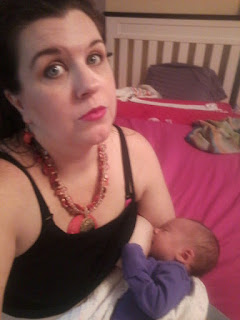 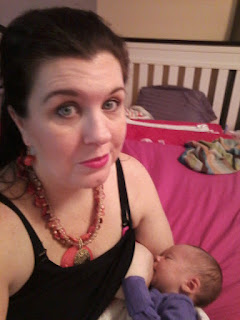 Sweet Isa & I before heading out....it's her favorite thing to do. hahaha

Oh my gosh, you guys!! I had such a wonderful day yesterday!

A dear friend of mine (I've known her for almost 15 years) just had her first baby last week. Yesterday, Baby V was just 3 days old. And has more hair on her head than I do! She is completely adorable!!

Anyway, my friend had a very long and tiring labor and delivery and her doctor...ooooh, girls, let me just say that they had to practically hold me down from going after that doctor. She was just AWFUL to my friend during labor. My friend was literally crying in the hospital bed from the way that the doctor had spoken to her. And this was in the throes of labor when a mama needs the most support!

(For the sake of my friend's privacy, I am not saying her name or her baby's)

Anyway, my friend was determined to breastfeed but after such a long and strenuous labor, she was exhausted. The baby was exhausted. On top of all that, breastfeeding is hard in the beginning...especially when you've never done it before!

My friend was totally discouraged because someone told her that she wasn't producing enough milk/colostrum to feed her baby. Baby V wasn't making it easy on her mama by fussing at the nipple. When my friend pumped, however, I knew that she was producing PLENTY of colostrum for a newborn....she just needed some encouragment (and REST!) after the ordeal she had been through.

And...as many of you are so familiar with...the hospital quickly convinced her to begin supplementing with formula. That was when I knew that my friend needed some extra love and encouragement. (Let me stress this: her husband, mom and mother-in-law have been helping her SO much! But sometimes we just need our girlfriends, right, girls??)

So Antonio, I and baby Isabel went to visit them in the hospital.

After we had been there for a little while, Baby V began fussing and rooting around on her mama's chest. We all know what that means!! It's time to eat!!

First off, let me just say this: hospital beds are HORRIBLE at positioning the new mama for learning to breastfeed. It was so hard to get the angle she needed because the bed wouldn't sit up completely straight. So I had mama sit up straight and I put some pillows behind her back for some comfy support. I showed her how to express some milk onto the nipple and let Baby V smell/taste the milk to encourage her to latch on. And, boy, did Baby V want to latch on...but she's an impatient little thing! hahaha She'd latch on...but then was so busy hollerin' that she wasn't doing much suckling. So mama would have to reattach Baby V to the nipple. Over and over again. And Baby V's yelling wasn't helping her mama to relax.

My friend's shoulders slumped down after repeated attempts at latching Baby V onto her breast.

We were getting nowhere fast. Isabel and I had a rough start to breastfeeding (something I will blog about later) and I knew how my friend felt. I had experienced MANY moments with Isabel when she was just screaming, not latching on, and I felt like I was doing something wrong. My baby was hungry and I would think about myself "what kind of mother couldn't feed her own child?!" I would sob in bed and Antonio would look on helplessly. I felt extra frustrated that I had 4 years of breastfeeding under my belt only to be unable to get Baby #5 to latch on.

I knew how my friend felt.

But baby is hungry and not wanting to really participate in a learning exercise.

My friend looked up at me sadly and said "She's so hungry. She's not wanting to latch on. Should I call the nurse to bring us some formula?"

I was nervous because I knew that what I was about to suggest could very easily offend my friend...or freak her out...and might possibly make things worse...but I took a deep breath and asked softly:

"Would you mind if I breastfed her? Just to get her to calm down and then we'll try putting her on your breast again?"

My friend smiled in relief and said that she wouldn't mind at all. That she really didn't want to give Baby V formula...she just wanted her to have breastmilk.

I also figured that if Baby V truly wasn't able to latch on, I would be able to tell.

So I gently lifted Baby V up and carried her to the sofa that was next to her mama's hospital bed.

I lifted my shirt and opened my nursing bra and put Baby V to my breast....and she latched right on! She nursed like a champion!

We let her nurse until she was full and sleepy, no longer fussing.

Then I took her over to her mama, who then took out her own breast and offered it to a drowsy Baby V....she latched on and just began suckling.

You could feel the relief radiating from her mama! I knew that she could do it!!

I suggested that she let Baby V nurse whenever she wanted. That she would help her milk come in and in great supply. But that, for now, she has PLENTY of colostrum for Baby V.

We left the hosptial at the same time she did, they were discharged! Baby V was cleared to go home. My friend decided that she is going to continue to pump bottles for Baby V to have to give to her when she gets super fussy and doesn't want to latch on. That way she isn't having to give her formula. But that after her bottle, she will give her the breast and let her nurse. That way her milk will be encouraged to come in sooner and that Baby V will be familiar with breastfeeding and will be more willing to nurse once her milk comes in. (some babies will have a harder time accepting the breast if they have only been bottle fed for the first few days.)

Later that evening, I got a text from my friend...she sent a picture of a bottle of colostrum she had just pumped: 1 ounce!!! That is awesome!! 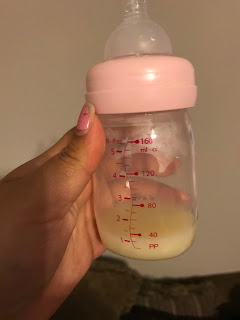 She sent me another text this morning and said that she had pumped another ounce.

Yay for breastfeeding!!! And a special Thank You to my friend for allowing me to share my milk with Baby V. It was such an honor and seriously made me fall head-over-heels in love with that sweet angel!
Labels: breastfeeding breastmilk Milk Sharing New Baby pumping

Anonymous said…
Wow, this is such a heart-warming story! I am so glad, that there are women out there, who do not compete, who is the best mommy and just support each other! <3
I was not that lucky, to have a good friend of me nursing at the same time. I had to choose a good organic formula, because I ran out of breastmilk (for mothers with the same problem I can recommend myorganicformula.com/hipp-organic-formula). Guess what my so called best friend did? Blamed me for being a bad mom. ^^ Whish you two all the best!
July 2, 2017 at 7:07 AM