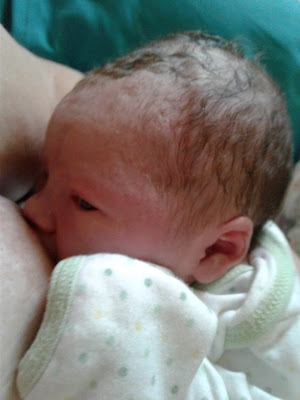 The midwife came for our 24-hour postpartum visit on Friday morning and said that Isa looked a bit jaundiced, so that I should make her initial pediatrician visit as soon as possible. I've took all 4 of my older children for that first visit...and have always left the office feeling like it was a big fat waste of time. So I hadn't been planning on taking Isabel for an immediate visit. Besides, I really hated the thought of taking her out into the big wide world when she was so little.

But I love my midwife and trust her advice...and since she told me to do it, I asked for her recommendations for pediatricians in the area.

She recommended one office, in particular, because she had heard that they can send parents home with a special blanket for jaundiced babies, if the babies needed it. I liked the sound of that, so I picked them out of the choices she gave me.

They ended up getting us in right away...like, "be here in 2 hours" right away!

So we got ready and headed out the door to Isa's first doctor visit!

Unfortunately, I didn't get any pictures of that visit because, as good as I felt for just having given birth about 24 hours before, I was still really tired! Picking up the camera didn't even occur to either Antonio or I.

But here's the general flow of the visit:

The doctor was clearly against home birth. It's not that she necessarily said it, but you could tell by her mannerisms. She also did make at least one snide comment about my midwife. So, yeah, we were over that appointment right away. Well, over the doctor anyways...the nurses and staff were AWESOME!!

She told us that Isabel did not have jaundice.

They weighed her...she weighed 6 lbs 5 oz (she weighed 6 lbs 11 oz at birth), so Isabel was off to a great start in the "getting enough to eat" department. Typically, breastfed newborns lose about 10% of their birth weight right off the bat...but Isa had lost less than 5%!! Way to go, chica!!

She passed her hearing test and they took her blood for the PKU testing.

It wasn't an easy feat (nor was their getting her blood pressure reading) because she did NOT want them touching her at all!

Then, the doctor ordered labs for Isa to have done. Off site. The tests were for finding out her Rh factor (I am O+) and for Coombs disease. The reason for these tests basically stemmed from Isabel having jaundice. Which she didn't have. So WHY would they be wanting these tests done? It made no sense to us. So we asked why she needed them when she was, according to the doctor, not even jaundiced? They didn't offer much by way of an answer except to say "it needs to be done. They would have done it automatically if she had been born in a hospital." Well, you know what? That's not a good enough answer for me. The reason I chose a home birth is to AVOID most of the things that hospitals automatically/routinely do.

They scheduled us for another weight check in 3 days.

We didn't take her for the testing...I even bought a baby scale to weigh Isabel at home so that I didn't have to take her back to that doctor. But I belong to an awesome network of like-minded moms and one of them has been going to that office for years. She said that I should go again and just see a different doctor because not all of them were like the doctor we had seen. I was also doubting the original doctor's opinion that Isabel didn't have jaundice. She definitely had a yellow tint and her eyes looked slightely yellow.

So we went to the 3 day check up and saw a different doctor. 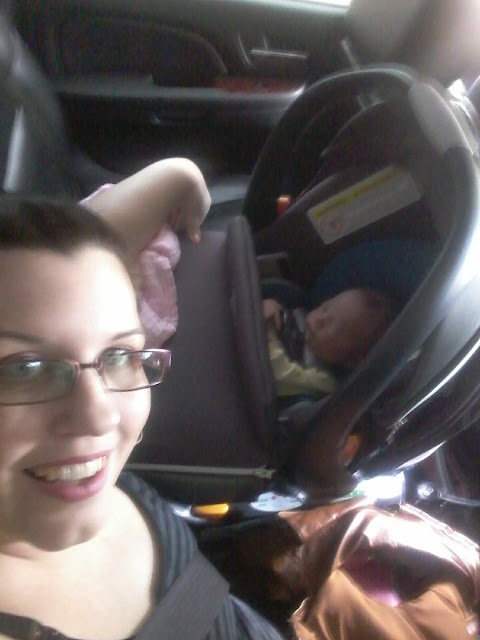 And it was a GREAT experience!!

She had actually gained 2 ounces!!

And the doctor was fantastic & super helpful and informative.

He said that she DID, in fact, have jaundice. But that it was very mild and that he wasn't worried at all. He said that I have been doing the perfect thing for helping her get over it: lots of breastfeeding on demand!! Plus, my milk had come in and she was pooping yellow poop...no more meconium!! He said that the jaundice would be gone before we knew it. (and he was right!!! It was pretty much gone by the next day)

He didn't mention her needing those tests that the other doctor had wanted done, so unless he tells me that he wants her to get them (in which case, we'll have a thorough discussion about it), I'm considering the matter closed.

I'm really glad that we opted to take her back for that second visit...it really did help to put my mind at ease. 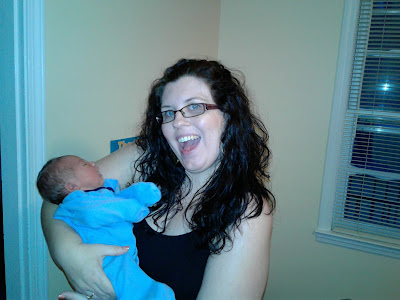 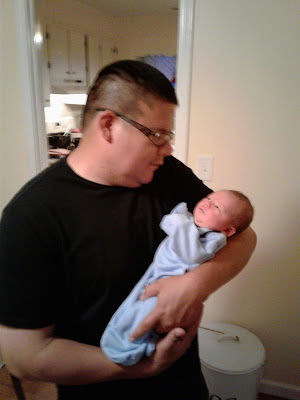 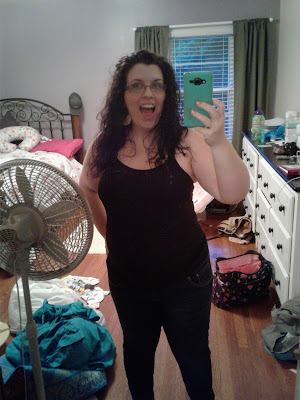 Not too shabby for just a few days postpartum, eh??!!
...the exhaustion hit the next day, I think. hahahaha