He's crying and shaking and saying he feels so sick.

Not sure if he's really feeling that crummy or if he's just in Boot Camp for how to be a Sick Man. 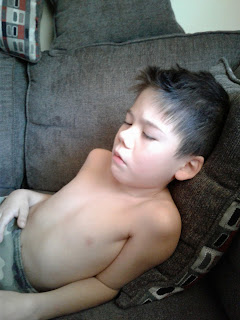 Lest you think I'm heartless, I've checked and he doesn't have a fever. I bought him Season 5 of old school Looney Tunes and told him we'll chill out on the couch for the day.

This is big because normally the kids can't watch tv (or play electronics) until after 5 pm.

Mahri and Levi were both sick with similar symptoms earlier this week and neither was this distraught over it.

He's currently crying (in the pic and in life) because I gave him a honey lemon cough drop for his throat.

UPDATE: Well, I feel like sh*t. Turns out, he really IS sick. He began vomiting shortly after I originally published this post. 😔

And now I'M feeling sick to my stomach a bit. I drank about a tablespoon of Bragg apple cider vinegar to kill off whatever germs are in my body, hopefully before I get sick.

Wish us luck that this passes quickly!