Saturday consisted of bagels for breakfast and afterwards I had the kids all straighten up their bedrooms. Then the boys played and rough-housed indoors...until I forced them to take it outside. Mahri practiced her face painting by making herself up to be a beautiful sugar skull doll! 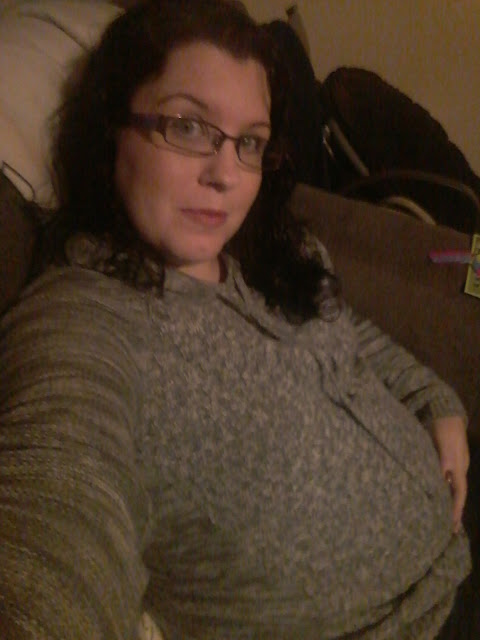 I got my package from Southern Magnolia Minerals (my favorite organic natural makeup company), so I opened that up. I took advantage of her recent $10 refill sale and stocked up on foundation and primer. I also ordered a few samples of concealer for under my eyes. Which are beginning to resemble raccoon eyes.

We had leftover bowling alley pizza for lunch again...see??? I wasn't going to waste that stuff. hahaha

Antonio and I went out on Date Night...this time we went to Logan's Steak House.

We shared the Nashville Trio appetizer plate with fried mushrooms, mozzarella sticks and mild buffalo wings. For dinner, I had the sirloin (medium-well) and I swear the baby wanted macaroni and cheese and loaded mashed potatoes. I was wrong. Baby only wanted the apps and the steak. The last two times I've been there, I've gotten watermelon sweet tea to drink. It is REALLY good! 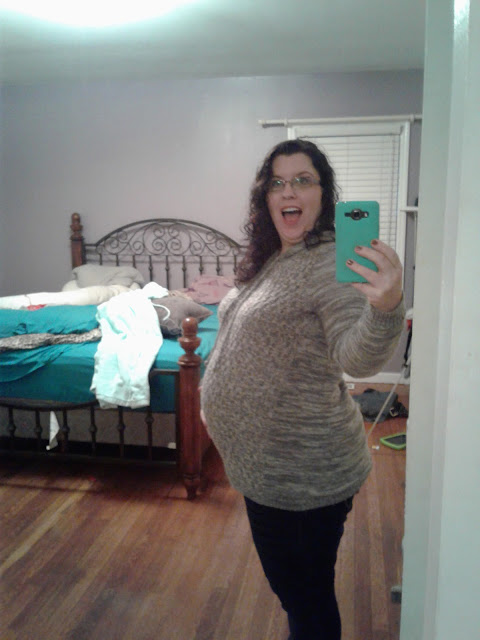 On Sunday, we took the boys to get their hair cuts. The stylists even commented on how fast their hair grows. I find it pretty amazing myself, to be honest.

We came home after haircuts so that Mahri could open her birthday gifts. We really try to make birthday celebrations last over the course of a few days. So back on Thursday we went bowling then we did cake and presents on Sunday.

Some of her gifts....metallic temporary tattoos 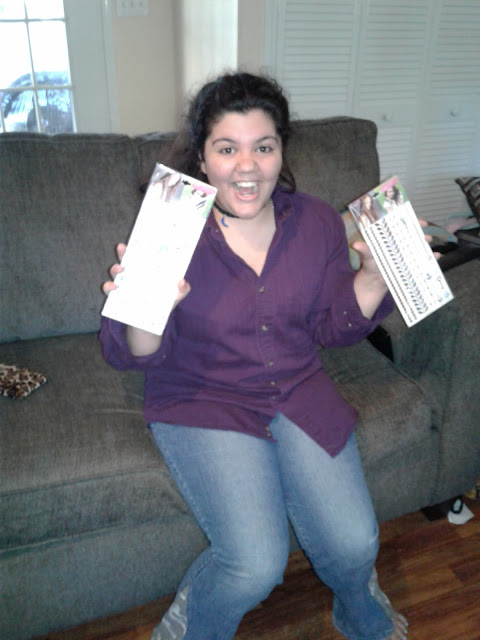 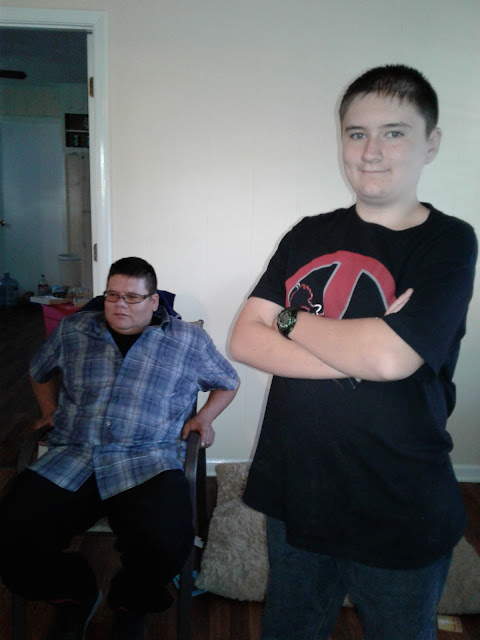 A sleep mask (she has been having trouble sleeping) 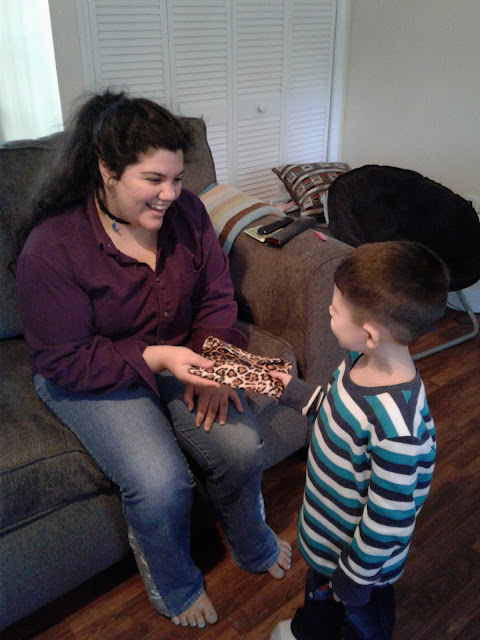 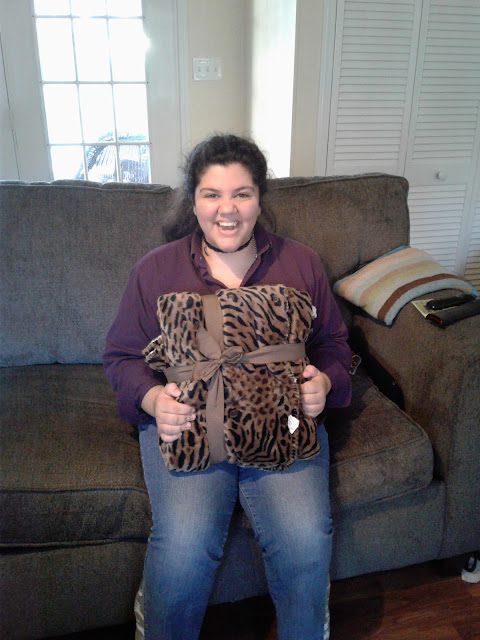 A train case filled with makeup. 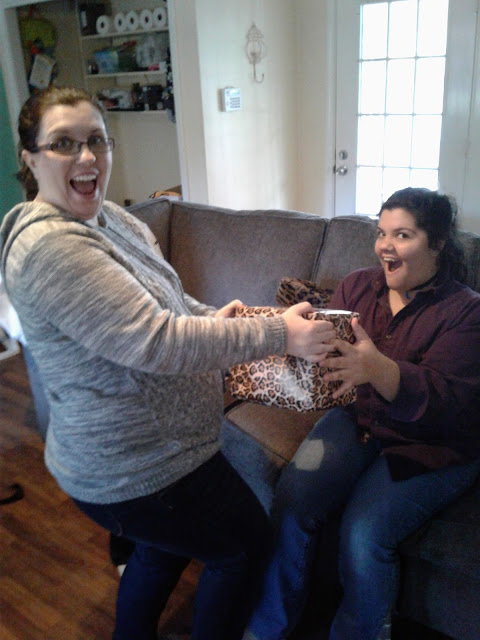 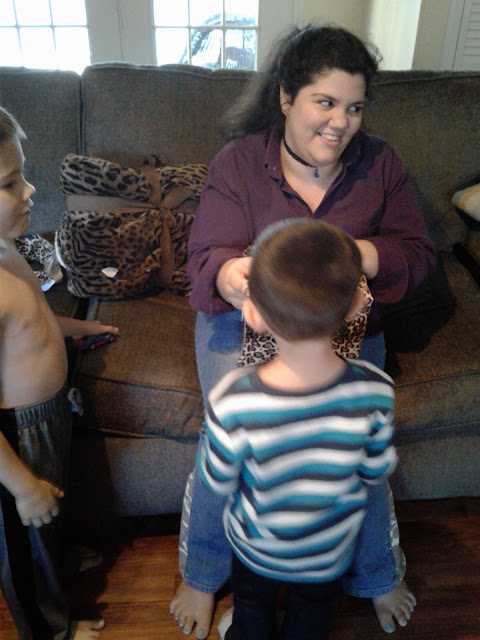 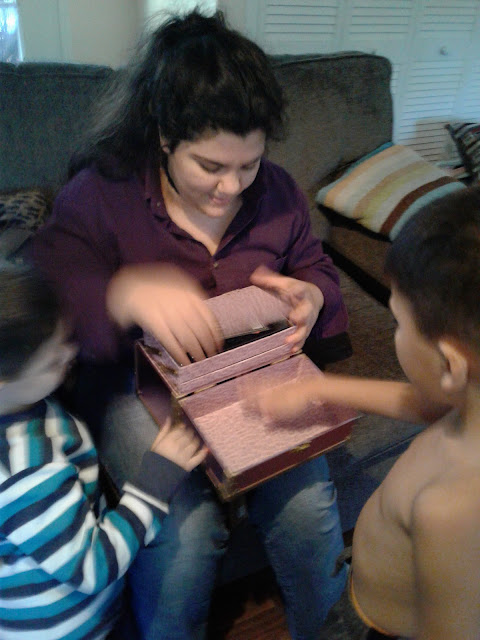 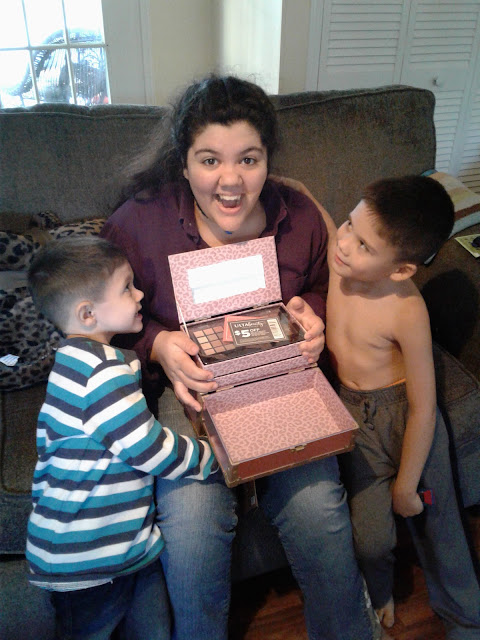 And a gift card to Ulta 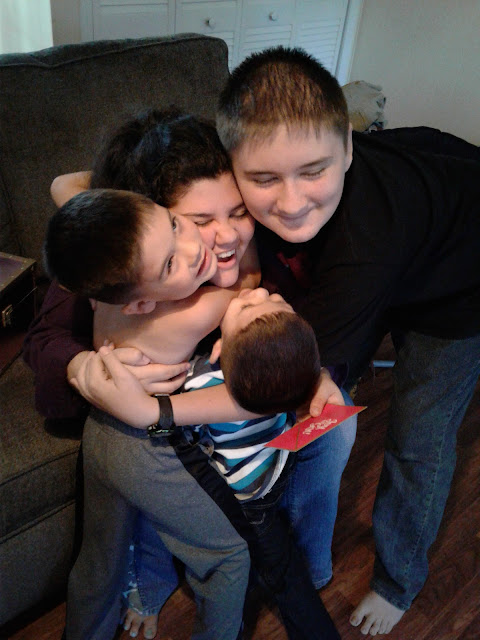 She also had gotten a new phone a few weeks ago that was considered one of her birthday gifts.

We went to Cracker Barrel for dinner. Thank God everyone else wanted it because I was embarrassed to admit how badly I was craving chicken. hahaha I got their Homestyle Chicken with dumplings and green beans. And brown rice pilaf. I barely ate half of it but that's okay because that just means I get lots of yummy leftovers for lunch this week! hahaha

We also went to Publix to pick up Mahri's birthday cake. She wanted a lemon-vanilla cake...and, dude, was it GOOD!! 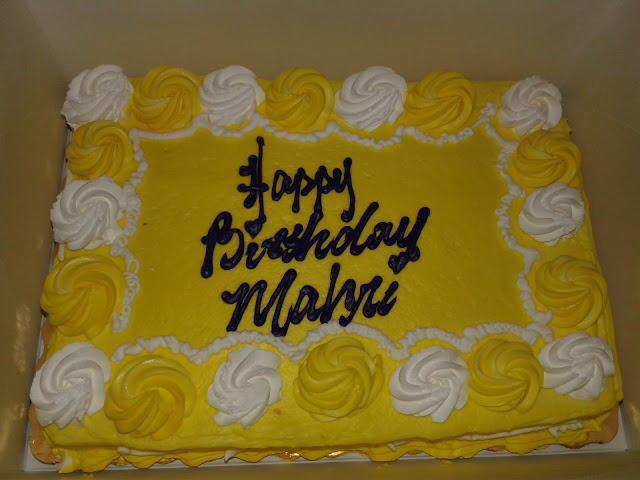 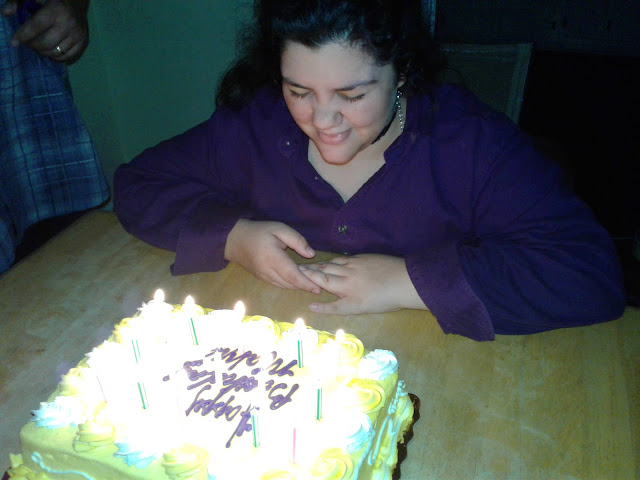 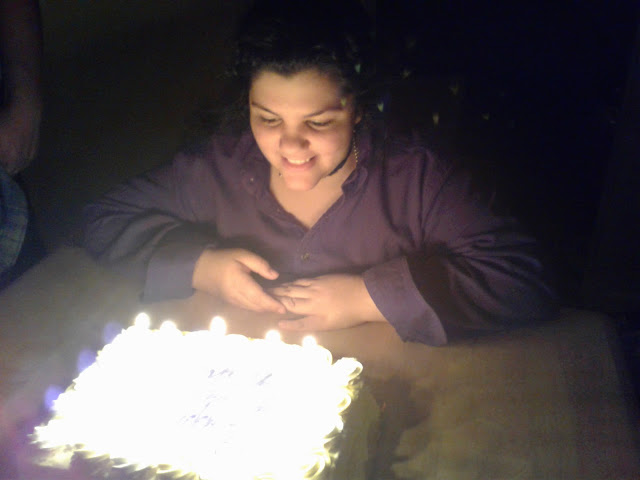 Right before Antonio smashed her face into the cake. Totally staged, by the way. hahaha 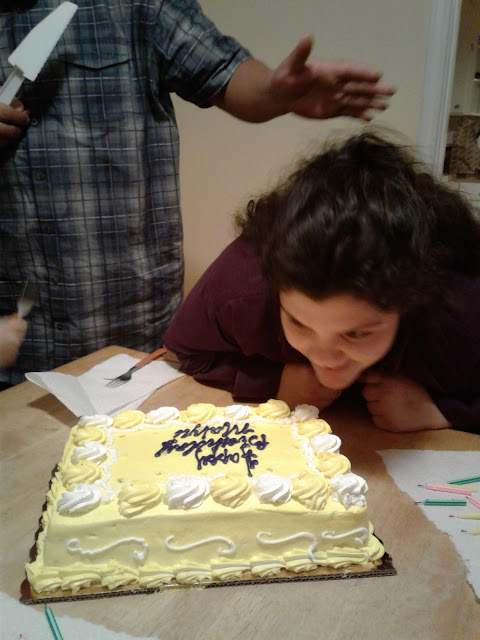 After the delicious cake, she picked the new Jungle Book movie to watch as a family movie night together. We all really liked it! Austin said that he was Bagheera. Levi said he was the squirrel. 😆

The kids all slept in on Monday. I think they were just plain wore out from all the birthday fun yesterday.

While most of them were sleeping, I dusted the playroom and also the kitchen windows and window shelves.

When they woke up, the big kids worked on a few of their chores.

I made them scrambled eggs for breakfast and they had applesauce with them.

While I got breakfast ready, Austin fed the dog while Levi vacuumed the kitchen floor. 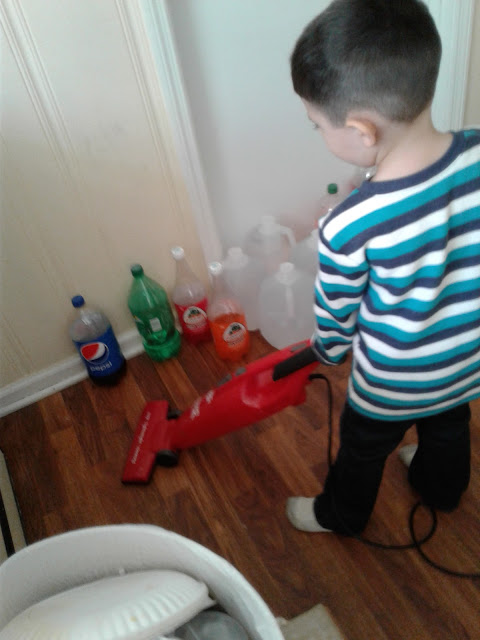 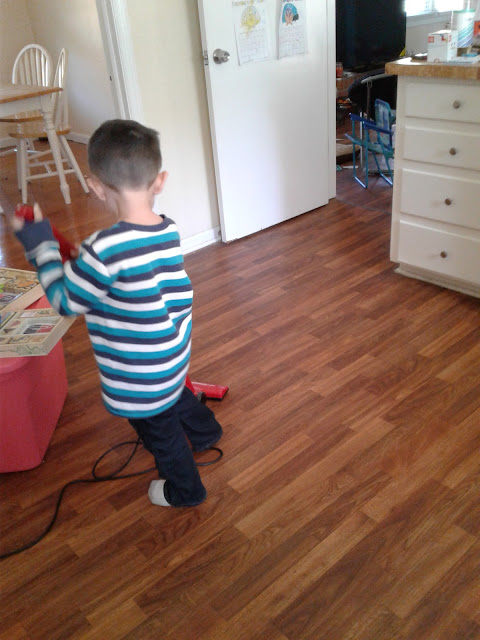 A Lego was accidentally sucked up by the vacuum... 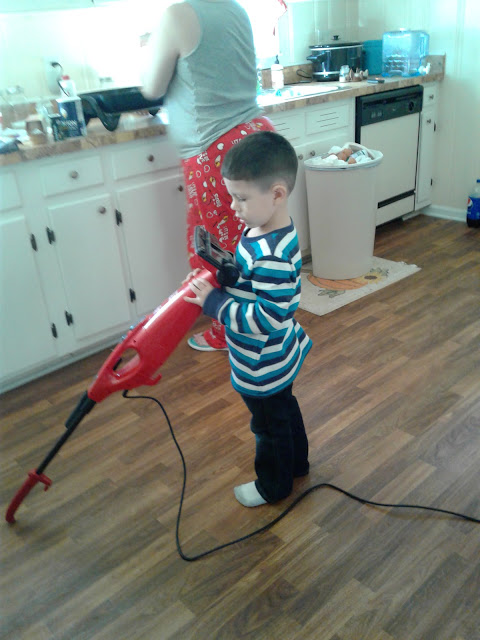 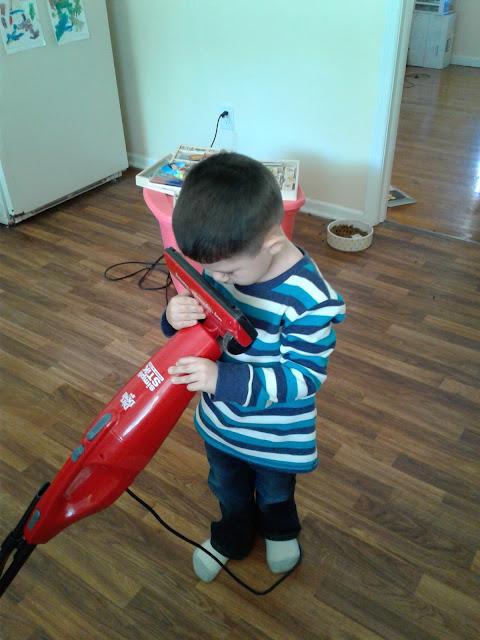 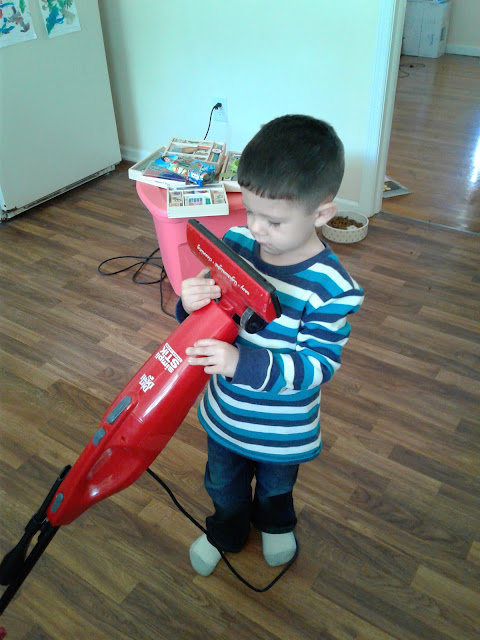 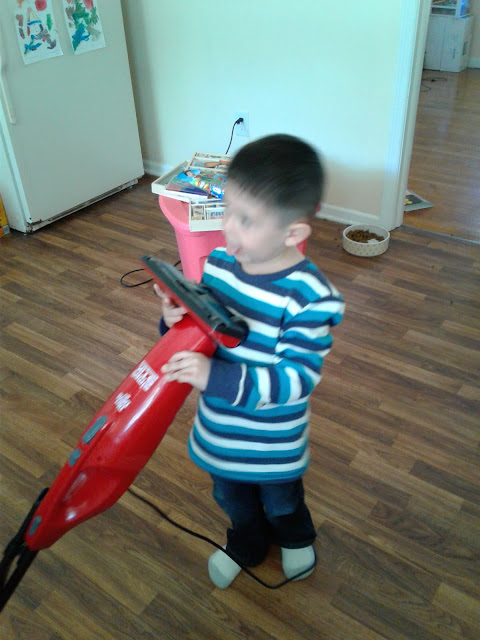 Soon, he grew tired of this vacuuming endeavor and rebelled... 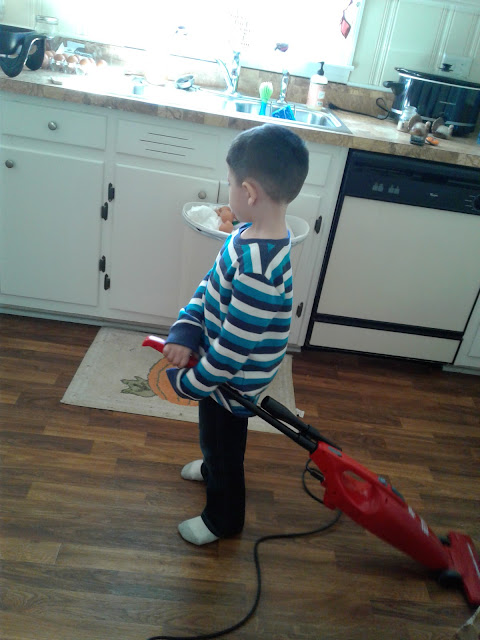 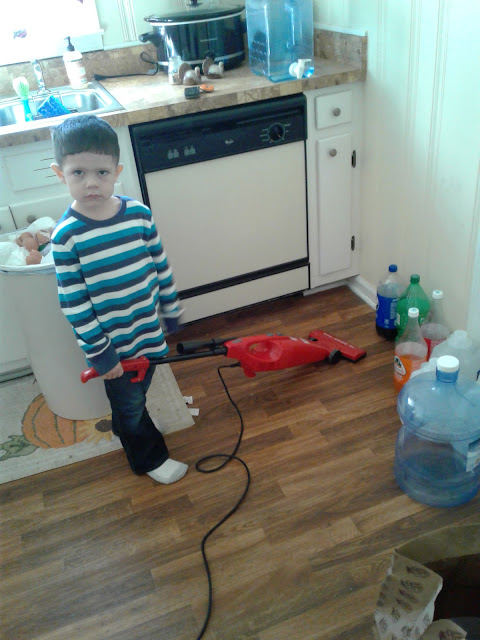 And, finally, just set it down and walked away. ::sigh:: 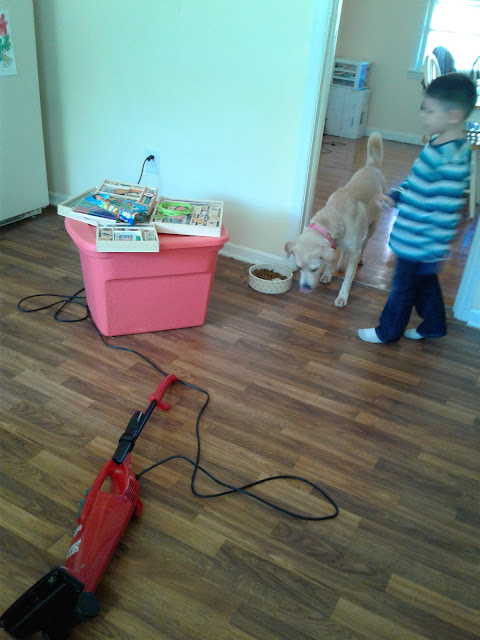 Because they chose to get a late start on starting school, they ended up ending their school day much later than usual and finished up not long before dinner.

Which was Cauliflower Chowder with dinner rolls.

I say that about my dinners a lot, don't I? ::sheepish duck of head:: Well, hey, I'm being honest. I know I've also told of dinner recipes gone horribly wrong at some point...hahahaha

Also, I am determined to not eat out/get take out nearly as much as we did last week. So all of the recipes that I didn't cook yesterday....are being dished up this week, so long as nothing rotted in the fridge. ::smile::

There will also probably not be a weekly grocery haul video this week, as I haven't done my shopping yet. I've still got dinner for Tuesday night and possibly Wednesday (though I'll have to double check on that one) and then there's Thanksgiving. Which I am not AT ALL ready or prepared for.

Last year I cooked a vegetarian Thanksgiving sans turkey. It was a very sad affair, I'm afraid, although we all did appreciate that dinner consisted of nothing but side dishes! This year, we shall have our turkey!

Tuesday and Wednesday both had me down with a constant migraine so I got pretty much nothing done. I did, however, cook a home-cooked dinner at least on Tuesday!

::round of applause:: hahaha

I made black bean and cheese enchiladas...which Levi claimed were too spicy (even though I bought mild sauce), so I let him have a cheese stick, a cup of applesauce and a dinner roll.

I think that finding out that someone had stolen my identity and my fight to regain control of the account they had hacked and locked me out of really made my headache MUCH worse. I'll be blogging about that adventure soon!

We also decided on Tuesday that we were just going to order one of Cracker Barrel's Holiday Meals To Go for Thanksgiving dinner. So I called and ordered that to be picked up on Thanksgiving morning.

Wednesday, though, Antonio brought home Wendy's, which I wasn't able to even eat much of. I ate a few fries and a couple of bites of a chicken sandwich before going back to bed.

Antonio got up early (for a day off) and picked up our Thanksgiving dinner from Cracker Barrel.

By the time he got back, I was in the shower and getting ready to take the kids to get donuts from Dunkin Donuts for breakfast.

Once we had gotten back home and eaten our breakfast, I filmed a Thanksgiving Dinner Haul video:

While I was editing the video, I turned on The Little Mermaid on the tv and we all watched it together.

Then I began putting all of the Cracker Barrel fare in the oven and Mahri began making the green bean casserole recipe that I had made last year for Thanksgiving. (if you make this recipe, please be sure to saute your onions before baking the dish. The recipe doesn't call for it but if you don't like crunchy onions in your food, saute them before baking!) QUICK EDIT: We talked about this recipe vs the "traditional" green bean casserole that calls for french fried onions...we've decided that we think that we like the traditional one better...we think this one has a bit too much sour cream flavor in it. Maybe I'll work on tweaking the recipe to better suit our tastes later.... I'll let you know if I do! 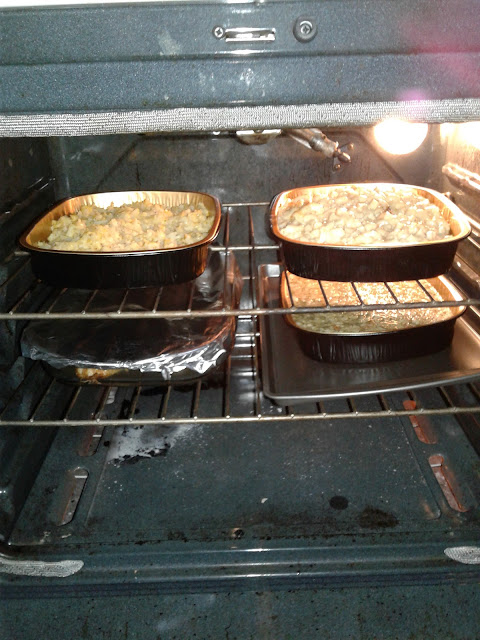 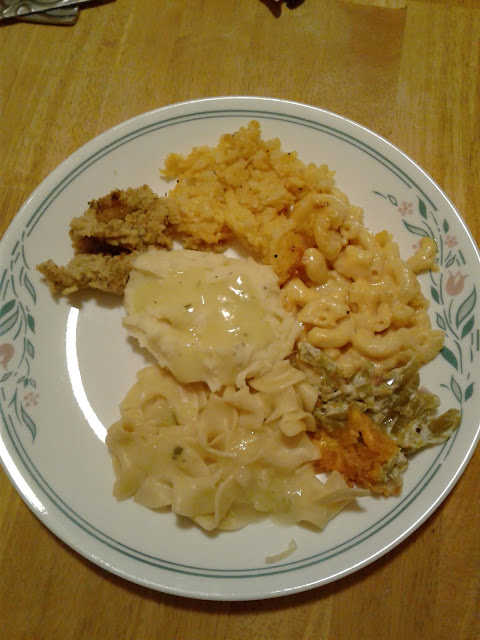 In all honesty, I ate maybe 8 bites. It wasn't my favorite Thanksgiving meal.

And I *really* don't think it was worth it to order from CB.

I ended up having to warm up everything anyway and bake most of it for about an hour. The food was pretty bland. Not what we were expecting from Cracker Barrel fare, that's for sure. I really wish I would have just cooked everything from scratch, which is what we'll be doing next year, that's for sure!

FRIDAY brought us donuts for breakfast, laundry and playing outside.

For dinner, we picked up Arby's (yeah, takeout. Sue me.) and watched The Secret Life of Pets as a family movie.

I can't believe that tomorrow I'll be 20 weeks into this pregnancy!

How was your week, guys? Let me know in the comments!

Anonymous said…
loved the blog, every bit of it !! although I must admit, watching the different faces of Levi with the vacuum, and while holding it upside down to look for the lego it sucked up, i envisioned the vacuum turning on while he had his face so close looking for the Lego. He has so many different expressions, that would have been one for the books (of course, i didnt want him to get hurt, I was just envisioning it scaring him while planting his face so close to the bottom), and i know now you have to be laughing too !!!
love the blogs, keep them up, they make my day when I read them. xoxoxo much love momma of 4 and soon to be 5 ;)
jeanne
November 28, 2016 at 8:29 PM

Is It Naptime Yet said…
The many faces of Levi always have me rolling!! hahaha He is quite the character without even trying. I know what you mean on how hilarious that would have been!! AHAHAHA!!! Although...he and Austin frequently suck their faces up with the Shop Vac, so maybe it wouldn't have phased him!! These kids, I'm tellin' ya!! :D
December 1, 2016 at 8:06 PM