Too Late For Love? 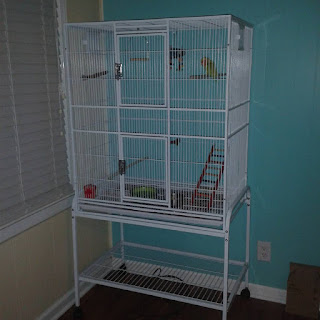 I read that lovebirds can live 15+ years! That's a very long time when you're living in a cage, you know? We don't let her out to fly freely in the house too often since she began attacking me and the children. Poor Christian's head and ears were red for a week after she "mauled" him the last time! hahaha

A little back story on Indiana Jones (who we found out was actually a female after she laid an egg earlier this year): I had no plans of owning a bird. One day, while we were at a nearby pet store picking up dog food, we saw her in a cage with 2 other paired peach-faced lovebirds. She looked so sad and forlorn, all by herself. She was bald in some areas and just sat alone. The clerk explained that Indiana had been there for more than 2 months. She had originally had a mate but it had died a couple of months earlier. They found her "crying" (chirping in a very strange voice) over his tiny little body. So now she was all alone and the other birds didn't want her because they were partners and not interested in a third wheel. They wouldn't even let her on the same perch as they were on! How mean! Well, as sorry as I felt, I didn't feel like rushing into adopting another new pet (we had recently adopted our yellow Lab from the pound). So I told Antonio that I would pray about it and that if she was still there the next time we went in, I would adopt her.

Two weeks later, we returned and there she was. All alone. The other 2 lovebirds had been adopted. She was so pitifully alone. Well, that was that. Miss Indiana Jones was coming home with us.

We had read that it may be best to not buy her a mate; that she would be more open to bonding with our family if she had no other bird to pair with. But she has been evil feisty since Day 1. And we've had her for over a year! She bites us through the cage bars and tries to eat our hands when we go to change her food and water. So now I am debating on adopting a mate for her, but I'm not sure if it's too late. She's been over a year with no mate. I'd hate to adopt another bird only to have them hate each other. Then I'd be with TWO birds in TWO different cages.

1 large dog
1 cat
1 bird
4 kids
pregnant with #5
1 husband
homeschooling
co-running our family business
...some may say that I already have my plate quite full