Nothing new to report.

Antonio called landlord to check up on a move-in date. The landlord said that they took the day off to work on another job but they will be done with the house this week.

I have my doubts.

I went over to water the flowers this evening and to check on the progress of the house.

I really hope the house will be done this week.

Our current rental office wants to come next week to check out our trailer. I'm hoping to be out by then just because I hate dealing with them. I'd rather the house be almost empty and they can just see what there is to see without having to interact with me.

I'm not a people person, currently.

LATER THAT NIGHT.....so it is 10 pm and Antonio just called the painter/worker guy. He said how it didn't look like they've been at the house today, were they going to be working tomorrow?

They should be back to working on the house on Thursday.

It is supposed to be done by Sunday!

Apparently, their boss/the landlord, sent them to work on another job for a few days.

They still need to put in new woodwork in some of the rooms, prime the rooms, paint the rooms, seal up some of the wood flooring in closets, put back the doors, put the kitchen cabinet doors back in, put the blinds back in, hoist up the carport another 18" (no clue knows why the landlord is doing that), have the termite guy out to check the house to make sure that the termites in the shed (not the storage building) didn't spread to the house, check the roof because now they think maybe there's a leak, fix some problem areas in some of the other rooms (patch holes, etc), tear down the shed that was destroyed by termites, replace the roof on the storage building and then paint the building, clean the gutters....the list goes on. How is that all going to get done by Sunday?! It's taken a month just to get the floors done and one room painted.

I am so beyond frustrated. Every single week we are told "oh, another 2 weeks".

We are going to be homeless if it doesn't get done soon.

I told Antonio that I'm ready to pull the plug. Just tell them that we're not interested in the house anymore. Then just use our money to get an apartment since I am not about to sign another year's lease here.

We are literally bursting at the seams here.

I can't even pack boxes and put them anywhere because we literally use just about everything here.

And I can't move anything into the house because the walls aren't even painted yet.

So I am having myself a nice ice cold Mike's Hard Mango Punch and going to bed and calling it a night. I am beyond stressed and depressed.

I want to clarify: the painter guys are extremely nice and sweet, as are their family members that I've met. But this is business. And I don't even think it's their fault...their boss keeps sending them to other jobs. I have homeschool starting up soon, trying to run our business, figure out where to have our supplies sent when I order them because we're not sure if we'll be in the new house in a week or here...we don't want to send the things to the wrong house, I'm trying to move a household of six people, a dog, a cat and a bird...all of this on my shoulders...and stress is just taking me down.

But at the end of the conversation, the painter promised Antonio that we could move in on Monday!

Now, not everything will be finished, but we can move in!

We won't be homeless!

While Antonio and I were working together, he called the landlord.

The landlord said that, yes, absolutely we can move in Monday!

In face, let's meet at the house and sign the lease!!

We've also become one of "those people" who hire people to do things.

I hate to say "landscaper" because, seriously, it's just cutting the grass and weedwhacking a bit. Just enough so that children don't get lost in the weeds. "Landscaper" sounds so fancy.

Anyway, the price they want to cut the grass is astronomical!

So we're checking out buying a fancy-schmancy zero-turn lawnmower.

We can also add "lawn mowing" to our list of featured services to our business and it will be paying for itself in no time at all!

Plus, who wants to spend 2,195 hours a week cutting grass?

(does anyone even know how proud I am of myself for keeping track of my days like this? Seriously. I want to give myself a brownie as a reward.)

So, ya'll will find this humorous.

Remember how I said that the painter guys leave at 4 or 5 pm?

Well, I took my time getting ready and showering all that stuff that makes a human presentable to the world...even though I had no intentions of making contact with any other humans....one must still maintain a decent amount of deodorant cleanliness, regardless.

So, anyway, I timed it so that I would pull into the driveway neatly at a few minutes after 5.

Except that when I drove up to the house at 5:02 pm, they were still there!

And I totally freaked out.

And then I found a church a little bit up the road and I pulled into their parking lot and sat there for a minute. I called Antonio to tell him of my dilemma.

At that very moment, do you know what happened?

It was like in slow motion....here comes the painter guy driving up the road, right towards me!!

I ducked my head down...because I'm an idiot.

Now, see, the church parking lot isn't exactly on my road...it is off of a side road.

And here comes painter guy down the side road. Right towards ME!!

And I glanced up, just as he passed, and he had a sort-of Mona Lisa smile on his face.

Crap! Did he see me? Is he smiling because I am an idiot and he knows it?!!

I waited until he drove down the road as far as I could see and then I pulled out of the parking lot and drove back to the now-empty house.

And that is the end of that story. hahaha

Now...back to the house....so I walked into the house with very low expectations.

That way I wouldn't be sad if I saw that there had been no progress made.

Turns out, I was thrilled beyond belief. I may have jumped up and down and screamed with joy!

The dining room is painted!!
(it needs a second coat and the trim needs painted...but it's mostly all the way painted!!)

The living room is mostly painted!!

The boys' room is mostly painted!!

Antonio's and my bedroom is mostly painted!!

These rooms just need the accent walls painted and possibly a second coat.

We're moving in on Monday!!
(which is, ironically, the day I am posting this)

PS....did I tell you that they opted to paint the house by hand and not with a sprayer? ::swoon:: 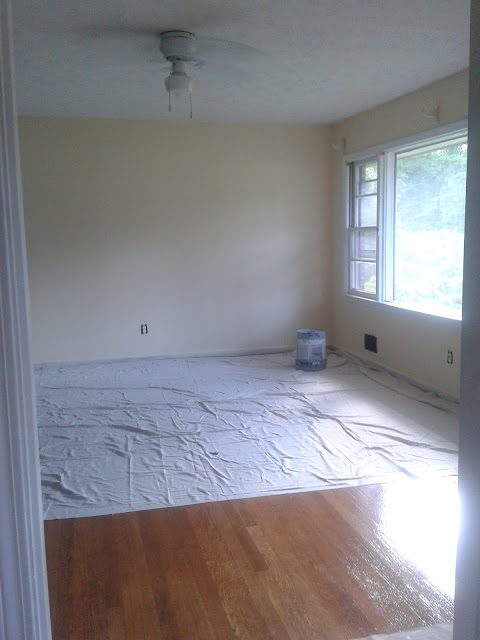 Top pic is the living room

Bottom pic is the dining room

Paint color in both rooms is the same: "Tea Light" from Sherwin Williams with Duration Home Paint. 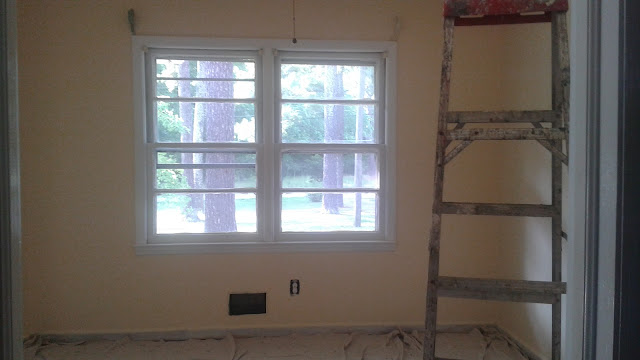 EVERY ROOM IS PAINTED!!

Now, the hallway and hallway bathroom still need a second coat and most of the trim in the house needs painted...but they are pretty much D.O.N.E!!!

The blue accent walls in both the boys' room and Mahri's room look AWESOME!

But, being the bad blogger that I am, I completely forgot to take pictures.

We only went to the house today to check on progress.

There were guys there raising up the carport.

And I have to say: it looks GOOD!!

Our landlord had told me that they were good...but I had my doubts, mainly because I didn't want the carport raised up any.

But it looks really good.

They took down the metal and wood support columns and put up ones that match the columns from my patio. The ones that looks like wrought iron.

Unfortunately, I don't think we'll be able to move in tomorrow morning.

But that's a major "possibly".

But I think I'm okay with that.

With the prospect of suddenly--and forever--leaving our current home, I am starting to freak out a little bit. Isn't that weird?? I mean, for years, all I wanted was out...and now that it's about to happen, I want to cry.

And really, it is.

Austin was just 3 months old when we came here to live.

We conceived Levi here 3 months later.....and we brought him home {here} from the hospital.

I've never lived somewhere this long since my childhood home.

My littlest two boys are sharing a twin bed in my and Antonio's bedroom because our trailer is too small to put them anywhere else.

For the first time in almost 6 years, it will be just the two of us (Antonio and I) in the bedroom.

Which, let's not beat around the bush, he is ecstatic about...but it has me half-near-hyperventilating.

Please tell me that I'm not incredibly psycho and weird for knowing that I'm going to miss them....

We're supposed to meet the landlord tomorrow to sign the lease!!