Follow my daily house adventures as we prepare and count down to moving in!!
We still have no official date given to us yet, on when we can move in...so we're all in suspense together! hahaha

We were told that the house might be done in about 2 weeks!

The guy in charge of fixing up the house said that he wants to do our floors right (sanding, refinishing the original hardwood floors) but knows that we want to get in soon. So he's going to do them now, I guess before he paints, so that they are able to start curing and will be ready in 2 weeks for move-in.

But cautioned us that we will have to leave the windows open for 21 days to let it air out the fumes.

Here's what our bedroom floors look like right now: 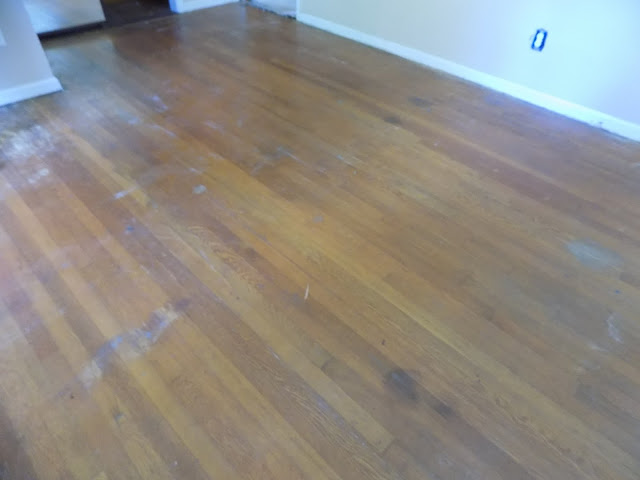 I picked out the front screen door.

It's funny because I have to order a special security door...not to keep thieves out so much as it is to keep my gorgeous guard dog IN the house. She takes her job very seriously and has destroyed one screen door, trying to get out, and learned to open the latch on the other. 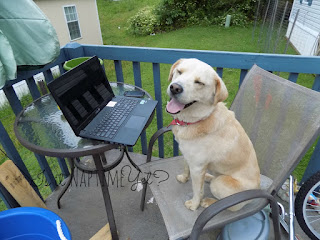 So, in order to protect the neighborhood, she needs a super strong door.

Plus, I like the idea of how safe these doors are.

They are steel doors and you install actual doorknobs and dead bolts!

This is the one I originally wanted:

But it was over $200 and not really how much I wanted to spend right now.

So I found this one and it seems pretty nice, too! The screen is actually galvanized and welded into the frame, so that thieves can't just bust out the screen and unlock the door.

Or, ya know, my dog can't break out the screen and take off down the street after the UPS guy.

I also began cleaning out my pantry to get rid of the old expired food and anything I don't think we'll ever use again. That way it will be much more streamlined when I pack it up and take it over to the new house. (you can find a picture of my disaster-area pantry on a previous post...but I'm ashamed of it and not making it easy for you to find hahaha) I'm planning on transferring all of my bulk spices/dried beans/flours/sugars to neatly labeled jars to make storage cuter and neater. I ordered a vintage label maker from eBay last week so that I can make embossed labels and not just the kind that print the letters onto the labels. It's supposed to be here this weekend.

We were told that we are required by the insurance company to have a second fence in place, this one only around the pool. That confuses me because I thought that the fence only had to be around the property itself? I don't know. But the landlord told us that Antonio is not allowed to open the pool and begin fixing it until the fence is up. But no one has talked with us yet about when or how the fence is being installed, so we're kind of in the lurch there. Hopefully we find out something soon about it. 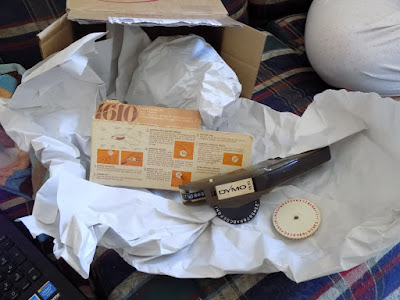 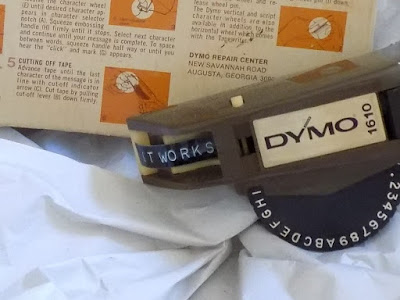 I can't wait to start labeling my jars!! Eeeee!!

We got some cute stuff for the house today...but forgot to take my camera with me today and dropped most of the stuff off at the house. I'll try to go back in the next couple of days and take some pics but if they're not on here, then I wasn't able to go back. Or I went back and forgot my camera. Ooops.

Some of what I bought
(and some of this may seem random, bear with me)

2 canvas textured prints for the hallway bathroom
(but I'm going to have to return one...or both...because there's not room for both...and I don't know if I just like one by itself) (update on 7/5...I think I'm returning both)

1 canvas textured print for the hallway. It's of a couple kissing in the rain on the streets of Paris in front of the Eiffel Tower. She is holding the leash of her little black dog. It's got a lot of red in it which is a bolder color than I usually go with...and I'm not sure if it will really "go" with any particular theme in my house (do I have a theme?? hmmm) but I "felt" something looking at it. So I got it. Easy peasy.

An orange blanket for one of the boys' beds. Target only had one left...so hopefully they'll get another in soon because I want one on each bed in the boys' room. It will go beautifully with their bright blue wall!

A bunch of jars for storing spices, rice and quinoa in.
(which I'm going to label with my vintage embossing label maker!!)
I figured that I can store several dozen pint-sized mason jars in the cabinet that I have designated my "spice cabinet". Is that weird? Like, I have upgraded past a spice rack and have moved on to a whole cabinet.... hahaha

Then we ran out to the house to drop most of it off and just wander around the house, checking it out.

We tried out the attic fan with trepidation...my parents have one and it is SO loud....I didn't want one that rumbled and shook all the walls, too. But it worked great! It wasn't much louder than a pedestal fan and it definitely began cooling down the house right away! We didn't have any of the windows open, just the back door, and you could feel an actual breeze of it moving the air through. The interior temperature of the house dropped several degrees in just a few minutes.

We decided to check out the crawl space. Now, we've lived in houses with crawl spaces. Antonio crawls around in them at work. They are typically extremely cramped and dirty. Dirt floors and only about 2-3 feet high. But ours is almost a basement!! It's on a concrete slab and is probably about 6 feet of space to stand up in! It is even wired for electricity and has lights installed! Apparently crawl space floods during heavy rains and they have a sump pump under there. Antonio knows how to fix and work those if they act up, so that's no problem. If we buy the house, he's going to work on fixing the drainage lines and gutters so that it stops flooding under there.

But my personal favorite feature of the crawl space is that it is plenty big enough and safe enough to go down there in case of a tornado!!! Dude, seriously, that is one of my absolute biggest fears and living in a flimsy trailer over the last 5 and a half years has really fed into those fears during storms...I had resigned myself to the fact that this house didn't have a basement and I'd just have to suck it up, buttercup. And it may not have a basement in the traditional sense, but it's sure enough big enough to be a storm shelter, baby!

We also discovered, to our disappointment, that although the house has city water (thank God!) (it is NO fun when you have  well and the electric goes out...no toilets or water for anybody)...but it does have a septic tank. I'm going to have to have someone out to look at it, I guess, to see how often it will need pumped? Is that how it works? I don't know.

Then I came home and labeled a jar. 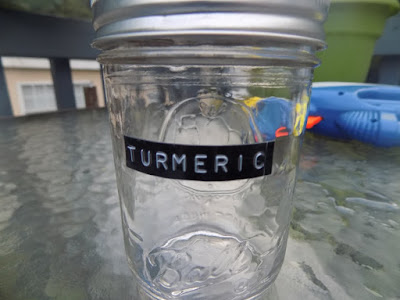 Later that night, I labeled ALLLL the jars! hahaha

Or at least all the jars that I had. Need to buy more!

The kids and I went to Hobby Lobby and snagged some great deals!

I got this really cute picture for the wall that looks vintage/distressed and it gives you measuring equivalents for when you're cooking.

So it's both cute AND functional.

I got a cute faux distressed wood sign that says

"You'll Forever Be My Always" 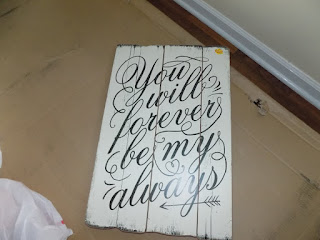 and I'm planning on putting it above my fireplace in the family room.

I got a cute hook to put up by the back door to hang Gypsy's leash on.

A little rock to sit by the back door that says

"This Family Plays Outdoors Til Dark"

"Not All Who Wander Are Lost"

that Mahri wants to put in her room.

The kids and I ran to check out a new Target...well, it's not new but we've never been to this one before.

I wanted to look for some pint-sized Mason jars with not much embossing on the jars (I need them fairly flat to get the labels to stick) but they were all out.

But I did find another orange microfleece blanket for the boys room!

That means that I have one for each boys' bunk!

I also bought the big kids each a shower caddy to keep all of their shtuff that they'll need to bring to my bathroom for their showers. 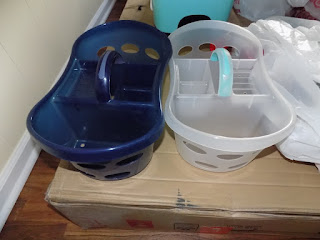 Anything that Mom or Dad doesn't use but they do, goes in their caddy for easy transport!

Does anyone know if this stuff is pretty safe? Looks like it's mainly just EOs...

After Target, we picked up Gypsy and then stopped by the house to see if the guys had start refinishing the floors yet.

They have begun sanding down the floors, so that's a bonus....but really little else has been done to the house. It's really starting to frustrate me. Also...something that concerns me...they only sanded the middle of the floors?? I mean, aren't you supposed to sand down the entire floor when you're refinishing them?

One thing that was done, however, was someone activated the alarm system, which they had said that they weren't going to do!!

I was messing with it, like I do every time I go over, trying to figure out how to activate just the chime alert that goes off whever someone comes/goes through the back door. I've done it a bunch of times before with absolutely no luck, but I still decided to try again yesterday.

But this time something different happened.

This time it said "Alarm Activated" and began counting down!!!

I felt like I was on the bomb squad! I was pushing buttons and cursing and sweating all over the place. But the countdown continued.

Mahri ran in and began randomly pushing buttons with me.

Our eyes grew bigger as we saw the numbers get lower...

They were NOT messing around when they installed this shit!! It was screaming and blaring and was soooooo loud!! We ran out of the house with our hands over our ears.

I began tossing our crap into the car and putting kids into car seats.

Our visit was over.

I left...no clue if the police showed up. I didn't stick around to find out.

I figured if our landlord wants to tell me to stop by anytime and give me keys and tell me that he wasn't going to activate the alarm (but that we could after we moved in, if we wanted to)...well, he can just deal with the side effects of his...forgetting to tell me that he changed his mind.

And that sums up the last week!

Hopefully there will be even better news and pictures of things as they get finished next week!