Okay, guys, I'm not going to lie: this "getting the house ready" process is beginning to grate on my nerves. It seems like this may be the slowest fix-up in the history of mankind.

But I forgot to tell you all that we turned in our notice to our current rental office, so we have to be out this month!

So here is the summary of the past week:

The hardwood floors are stained, guys!!

At first glance, all was pretty good. I noticed some questionable areas but didn't think too hard on them. I was just so relieved to see something done in the house.

And the mistakes don't really show up in the pictures, which is both good and bad.

Bad because, well, you're just having to take me on my word.

Good because...thank GOD they're not able to be spotted with a casual glance, ya know? 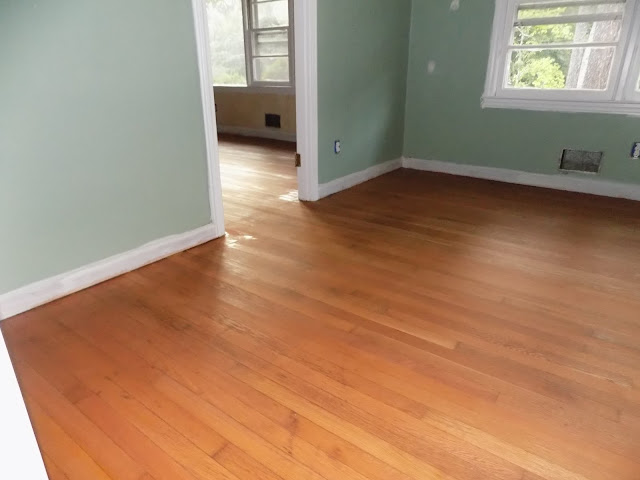 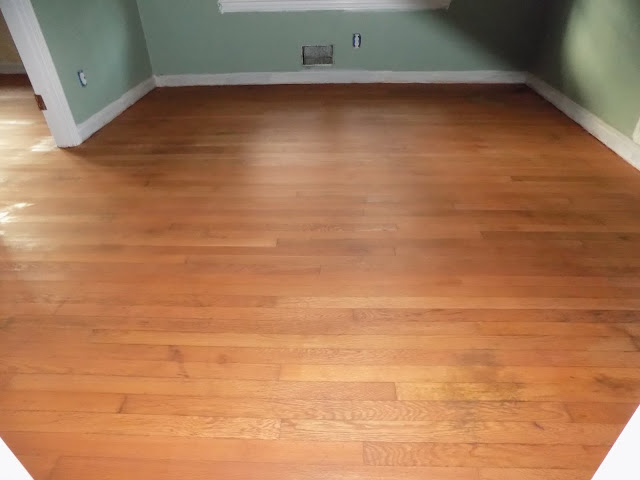 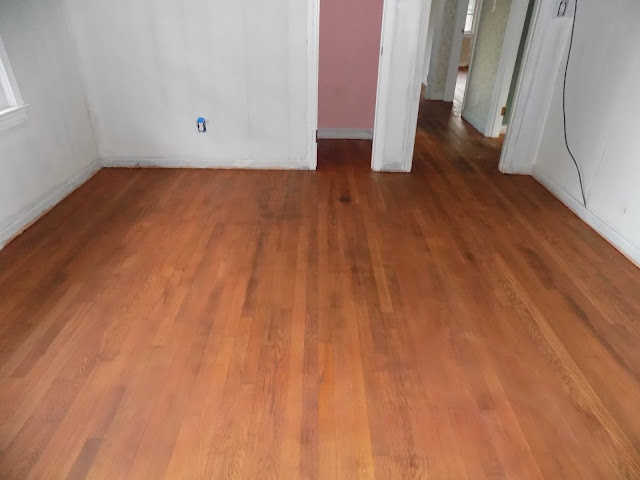 But there are dark spots and stains from who-knows-what that the sander couldn't get out.

Luckily, I was going for a more lived-in and imperfect look...so that makes it a bit easier. Had I been really looking forward to a professional-looking job, I would be seething.

At least those were my thoughts before I snuck into the rest of the house with Antonio on Sunday....

Unfortunately, I didn't get any pictures of that. I was too busy trying not to cry.

They had did some big long jaggedy looking cuts in the floor with the sander...or a screwdriver. Those weren't there originally...I saw that they had done them when they had sanded down the floor. But I didn't say anything because I thought they were planning on fixing it the next day.

They just stained right on top of them. There is absolutely no way to cover up the cuts. It looks like someone took a screwdriver and just dragged it along the floor in big jagged swirls.

We went to Home Depot to buy some things for the house.

We got our screen/security door...but had them hold it until the next day because we couldn't fit it in our van.

We also got one of those temporary screens that is hanging from something like a shower curtain rod? You just adjust it to fit in your door way and voila! Instant screen door!

The kids and dog can run in and out all day long without my having to keep opening the door.

Yes, I am apparently that lazy.

I also bought some flowers to plant in my big half-barrels that I used to have my (now dead) blueberry bushes in. 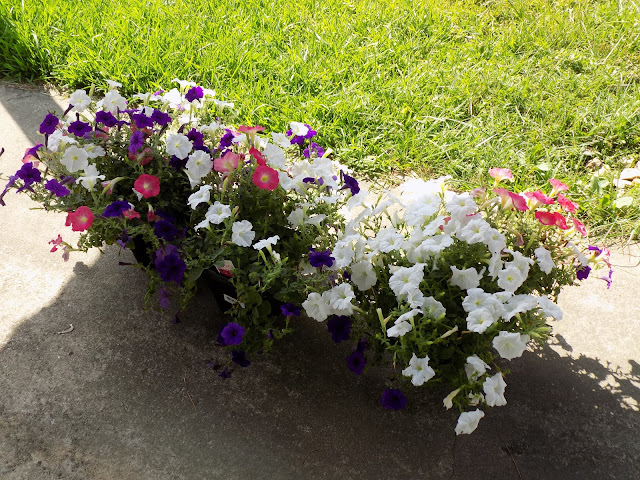 I also bought 2 hanging baskets for my back patio. 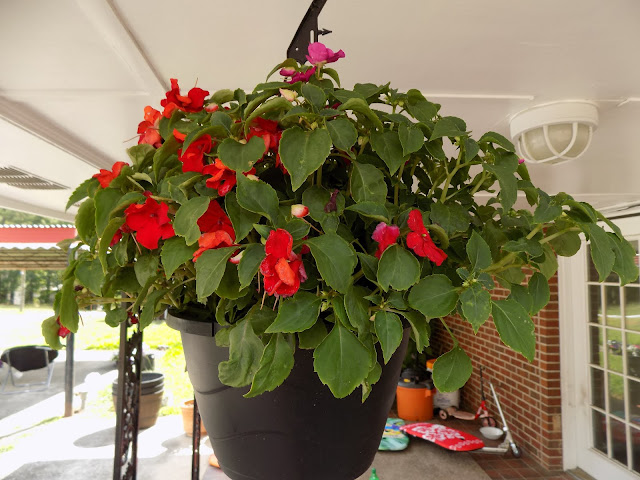 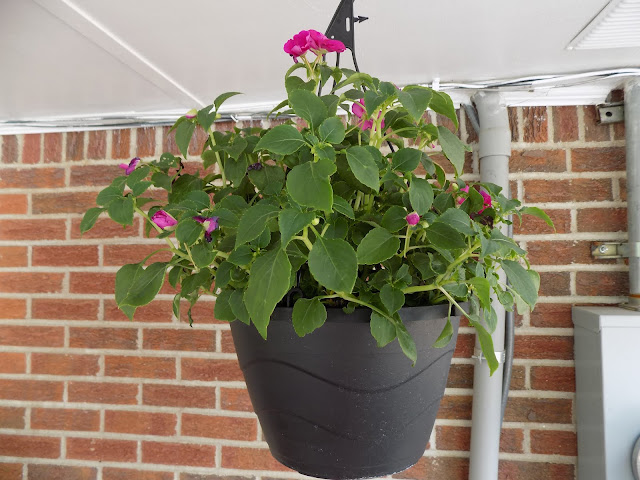 We went to Home Depot to pick up our screen door that we had them hold for us.

While there, we....accidentally?...picked up a few more items... 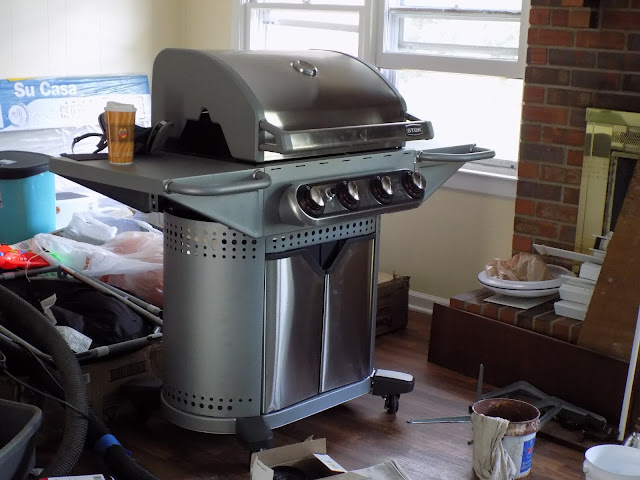 I named him Trevor.

(yes, I name my inanimate decor items.... But only the cute ones)

and more flowers to plant 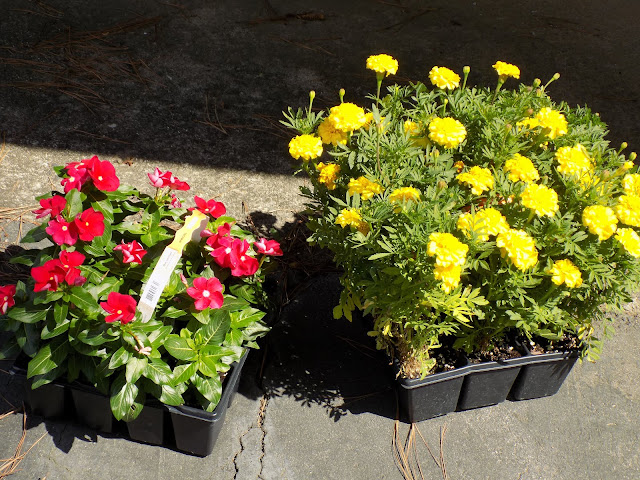 THE FLOORS ARE DONE, PEOPLES!!

THIS IS NOT A DRILL!

THE FLOORS ARE DONE!!

PROGRESS IS BEING MADE!!

Okay, so I know that I was super angry yesterday about my floors looking sad.

(Am I the house-renovation twist of a Bridezilla?! I'm a Reno-zilla?!! Eeeek!!)

But today, looking at them all shiny and purdy made the imperfections seem minor. 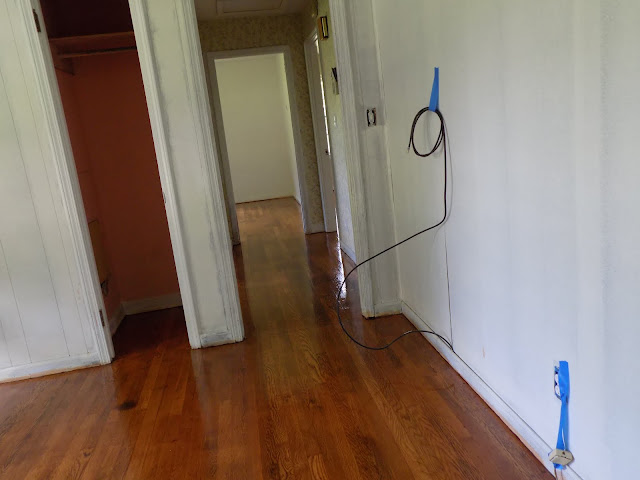 They also got the kitchen cabinets and most of the cabinet doors and the scalloped woodwork in the kitchen painted!! 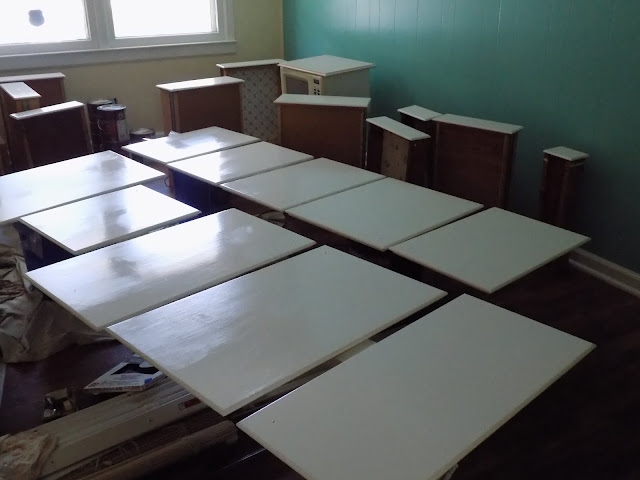 They also were super sweet and put my flowers out in the rain to get watered!

I thought that was really nice!

They have also begun the process to move and elevate the carport another 18 inches, to make room for Antonio's truck. Which can fit in it like it is...but they really want to make sure. hahaha 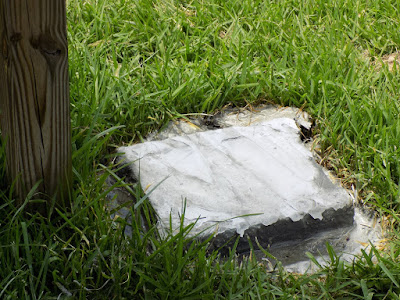 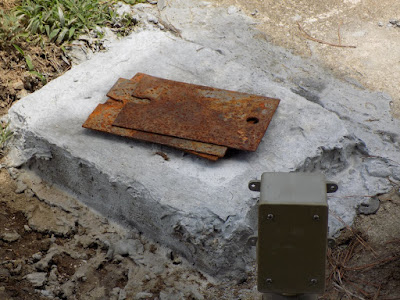 I am just super excited, though, because so much progress had been made since yesterday!

Also, I thought it was a sweet gesture that they put my flowers out in the rain. They are shade flowers and I had them under the porch and the carport but since it's raining today, the guys must have sat them out to soak in the goodness.

Antonio called the painters/house fixer-upper guys and they said that they would be done with the house in 2 weeks.

Don't they say "done in two weeks" every week?

I am too impatient for my own good.

The thought just occurred to me today that I want to cut down/remove this huge leafy plant (or ginormous weed??) that is growing outside of one of my kitchen windows and plant an herb garden there instead!

I wonder if it's too late in the year to plant herbs?

But it will work out great because we are renting a tiller from Home Depot and tilling up the flower beds in the front (Antonio removed over 4" of pine straw from one bed....but, unfortunately, the dirt was rock hard underneath), so just doing the smaller one in the back, too, shouldn't be so bad.

I went out to water my flowers today and check on progress. 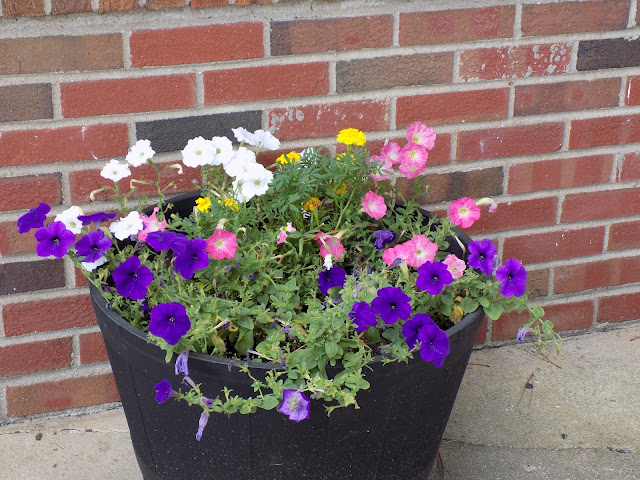 They have also put a second coat of paint on the kitchen cabinet doors and they are looking much nicer. They have also primed (or gave a first coat to) all of the household doors (closets and bedrooms and such). 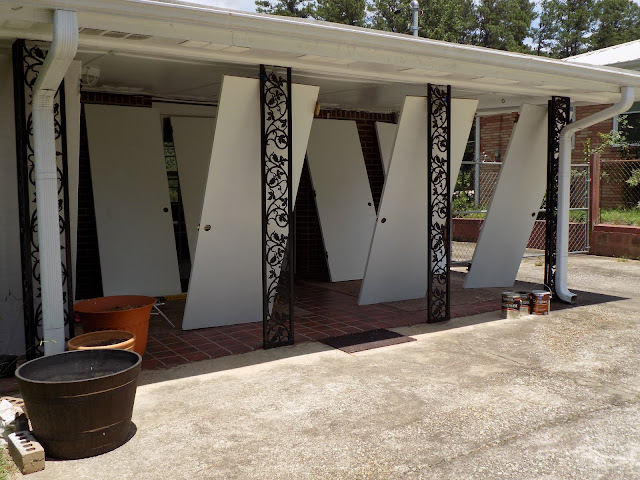