I was brought up to love animals. Growing up in the countryside, where people frequently dumped kittens and puppies out of cars to fend for themselves, being animal lovers, it seemed like the natural thing to do: give them homes.

But now I'm facing a dilemma.

For the last year or so, we've had this adorable pit bull that we nicknamed Jerome coming to visit our dog to play. He's always been super sweet and never aggressive towards her or us. 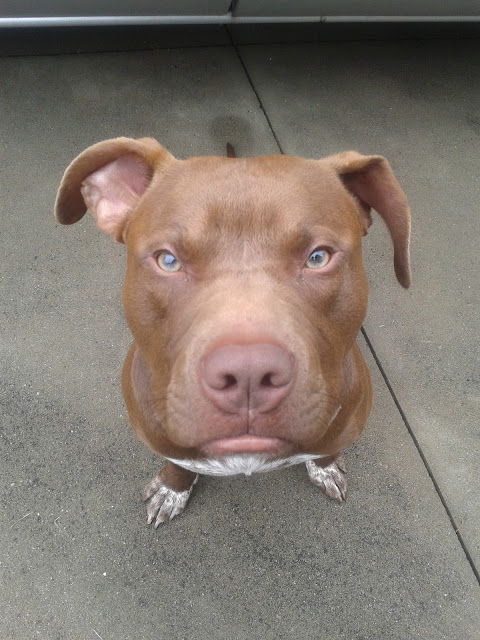 I still kept my kids at a slight distance, though, because he was a strange dog.

Jerome was always clean and shiny and well-fed. He walked proud...you know what I mean? Like, he was just a happy guy and proud to be alive. He was very well-mannered and just fun to hang out with. He used to come sometimes just to sit with me on my porch steps. Just me and Jerome, watching the cars driving by.

But about a week ago, I ran into a neighbor at Walmart. He mentioned how there was a mean pit bull in the neighborhood that tried to attack him. Now, when my Katie was alive, she also used to bark and run up to his dog to sniff her, when he was walking her, and I heard that man threaten to hit my Katie with his cane. So, in my estimation, he just doesn't seem to like other people's dogs too much. And that's okay. To each their own. He told me where the pit bull lived and how he called the police to report the dog as vicious. I don't know about your area, but where we live, that's pretty much guaranteeing the dog will be euthanized if the dog warden/pound comes to get him.

The next day, Jerome came down to visit. But something seemed different about Jerome. He was looking more haggard. Dirtier. Thinner. It suddently hit me: Jerome is the dog that the neighbor was talking about!! I suddenly got terrified. I have never seen a mean bone in this dog...once, when I brought out a bowl of food for him, Gypsy threw a fit and was barking and snarling at him...he just walked away from the food. He didn't want any problems with her. He has a sweet laidback temperment.

Jerome played with Gypsy for a few minutes, then ran off. I was worried for Jerome.

The next day, he came back for just a minute...he was looking even dirtier. He looked like something had hurt him. Marks on his side and his face just looked "off". I couldn't place it...maybe it was swollen? I don't know...he just looked a little different. Definitely not clean and shiny and well fed like before. I ran into the house to get him a bowl of food and water but when I came back outside, he was gone.

I decided to go up and talk to his owners, where my neighbor said that he lived. I saw Jerome walking up the road and I called to him. He came trotting over to me and walked up to his house with me. I knocked and knocked, but no one answered. That's when I noticed that there was a baby pitbull (maybe 3 mos old) tied up in the front yard. Tied to a grill with a short leash (maybe 2-3 ft long). No shelter. No food. Water was out of her reach. I spoke to 2 of their neighbors to see if Jerome did, in fact, live at this house. They said "yes" but that the dogs were not permitted inside the people's house. They were tied up outside with no shelter. 24/7. I looked at where Jerome had been tied up...I found a tether (slightly longer than the puppy's) tied to a tree...no food, no water. No wonder he had run away! Someone mentioned that the people were out of town? Another neighbor said that No, they were just at work for the day. The one thing that was clear: no one saw anything really wrong with how these dogs were being treated. I mentioned that they needed to let the owners know I had come to let them know about another neighbor calling the police on Jerome. That if the police came and saw the puppy tied up like that, that there were bound to be problems.

That night, I talked to my husband about it and he said that there is nothing we can do about it, except call the pound. But we got Gypsy from one of the MANY pounds in our area. That pound alone had over 400 pit bulls that nobody wanted. Just cage after cage with 3, 4, 5 pitbulls in each. I hate to think of the euthanasia rate. (I checked out the website for the dog warden that is in our specific area...they said that their online report form (for neglected/abused dogs) was out of order and that they are swamped with over 32,000 calls per month.)

I did not want to do that to these dogs. Especially to Jerome, who is not a cute adorable tiny little puppy.

But there is no way I can fit another large dog into our trailer.

So I've been praying and praying for a solution.

Since then, the puppy has disappeared from the front yard. I don't know where she is...maybe they've taken her into the house. But I looked in their front yard and back and she is gone.

Jerome, however, I'm getting afraid for.

Back on Sunday (today is Tuesday), we saw him while driving through our neighborhood. He was near a man who was walking his German Shepherd. He was yelling at Jerome to go away. Jerome quietly slunk away, towards us in our van (he didn't know it was us). I got out and gently called to Jerome. He was looking so dirty and thin. He ran away from me, scared. He's never been scared of me before. He ran to a neighboring home and was trying to find food around their trash can.

I got in the van, crying.

Last night, I had a great idea! Maybe not the greatest, I know. But it is, in my estimation, a much better solution than the one he's in now and the looming possibility of being euthanized by the pound.

I explained to my husband that Jerome was a proud dog before because he belonged to a family/pack. But when they threw him out, he lost all sense of pride. He's an outcast. Everyone now yells at him, is scared of him. No one wants to feed him. He is tired and has nowhere safe to sleep. Even if those assholes that owned him before treated him badly, at least, in his mind, he belonged.

So I presented my plan to my husband....here it is:

We will fix up our back porch a bit. Put a dog house on it (it's nice and cool and shady) and camoflauge it a bit, so that the pound or nosey people can't see it and throw a fit (though I don't see why they would). We can feed and water him and let him know that he is welcome here. He won't be tied up. He's not technically our dog. (Yet.) But, he is welcome here, to have a place to eat, drink and rest his head. I will take him to get neutered. I will do all that I can. And if he is still with us by the time we buy a house and move, he will come with us and be our forever dog.

My husband agreed. He said that he will help me set up the porch for him and find a dog house for Jerome. He will be part of a of our pack, if he wants.

And, I'm sure, Antonio will let me bring him in, should the weather get bad.

Unfortunely, we haven't seen Jerome since. The kids and I went walking around the neighborhood today. But we didn't see him. We asked a woman that we saw on the next street if she's seen him, but she said No.

I am just praying that he is okay. And if he needs a place to stay, he will find us. 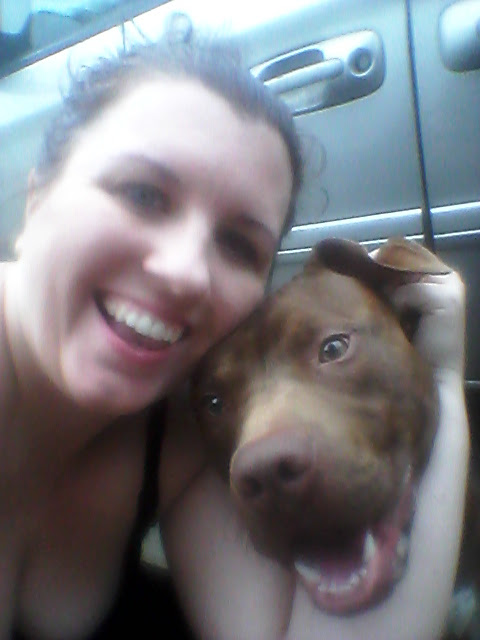