I decided to add a new series to the blog....we'll see if anyone is even interested in this.... ::smiles:: So let me know if you like these type of posts!

It's going to be about books we've read that month.

My list is just filled with half-read books because...I just don't have the time/attention span to finish a book anymore. Which is sad because I used to zoom through long novels in just a day or two. My daughter is searching for books that peak her interest. I tried to get her "into" Nancy Drew but she's just, like, "meh." She does seem to like R.L. Stine's books. I need to find some Christopher Pike ones for her! Any suggestions from my readers? She's 15. Nothing too racy or sexual, please!

My big kids have been reading these books together. They're not exactly...novels, shall we say. ::wink:: But they love these kinds of books that talk about weird facts. Like the fact that dinosaurs may still exist in the African Congo?? 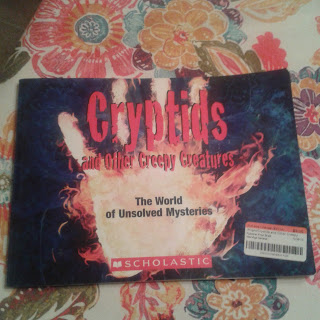 Cryptids & Other Creepy Creatures: The World of Unsolved Mysteries (John D. Wright)....
Description courtesy of my son, Christan: [We like this book] because it is a creepy but really, really cool and interesting book. MJ likes myths and urban legends, so this just was really up her alley. Christian likes how it includes descriptions from multiple sources, instead of just the author giving you his opinion and nothing else. It goes into detail of what locals say about the mysteries and lore. 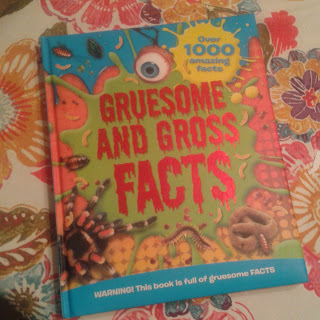 Gruesome & Gross Facts (Igloo Books).... MJ says this book definitely has some gross things in it. It contains a lot of facts (the cover states that it has over 1000 facts within), however, not just disgusting ones. She found it interesting that the days of the week are named after gods. Christian said that he likes how it talks about both modern things and ancient. One of his favorite facts was about the Celtic warriors and how they fashioned their hair to resemble the mane of a running horse to intimidate their enemies. He was also intrigued by some of the historical torture devices.

Also....Christian has been doing some reading on his own.... 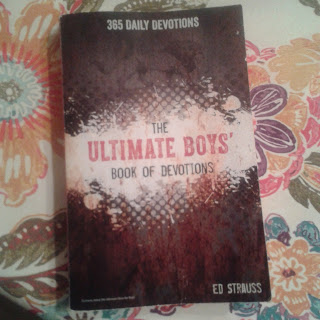 The Ultimate Boys' Book of Devotions: 365 Daily Devotions (Ed Strauss)....Christian reads this book every morning before beginning his school day, usually before he's even out of bed in the morning. He likes how it puts Biblical stories and philosophies and applies them to modern day scenarios. 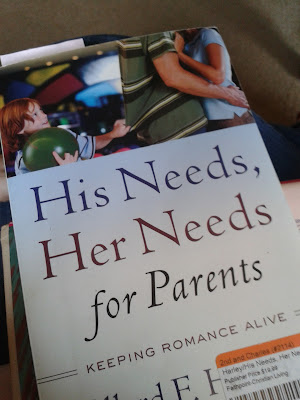 His Needs, Her Needs: For Parents (Willard F. Harley Jr)...This book has a lot of REALLY GREAT information on the ins and outs of why people fall in love. And how they can stay in love. Or fall back in love. I mean, seriously, it's great information. I just can't seem to get through it all. I think it's hard because Antonio hates to read and I think that this has a lot of great points...but his not wanting to read it makes it hard to discuss it without my sounding like I'm pointing out flaws in our relationship, or whatever (does that make sense?). (Note: I did not make it very far into this book. I don't seem to have the time to read very much) 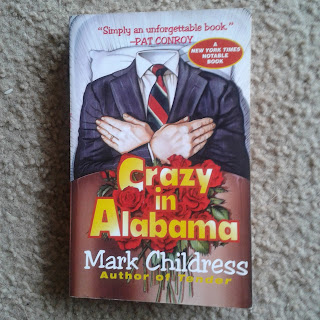 Crazy In Alabama (Mark Childress)....I read this book years ago...and I'm trying to give it another go-round. This is a good book...I probably wouldn't say "a great book"...but definitely lives up to title "Crazy". It delves into the racial tension and hostility that was occuring in the deep South in the early-mid 1960s. But...it was also mostly about Lucille...who murdered her abusive husband and took off for Hollywood...with his decapitated head along for the ride. I won't lie: I like weird books and movies (ask my friend, Aimee, who witnessed my odd taste in indie movies when she worked at my local video rental store. hahaha), so I did like this book. I loved Lucille and her obsession with old Hollywood glamour. (Note: Since I don't have very much time to read, I only read the parts featuring Lucille. I read it in a day or so. And it was a pretty long book. I still loved it as much as I did the first time...even her plotline is a little weird) 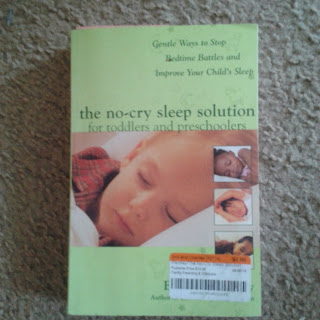 The No-Cry Sleep Solution for Toddlers & Preschoolers (Elizabeth Bentley)....I tried to start this but didn't get very far. It seems very informative and well-researched, as well as filled with recommendations for this method. The reason I am (trying to) reading this is because my youngest boys rarely go to sleep on their owns. Never could I just lie them in bed, walk away, and they just go to sleep. WTF is that?! That's a thing???! Parents can actually do that with their kids?? My big kids can and did when they were younger...but these guys just won't. So I am working on a solution that doesn't involve them screaming and crying. Hence, the title. ::wink::

(This list seems quite short compared to all of the reading I do every day...but they often request that I read the same book twice in a row...several times a day...every day for weeks on end...) 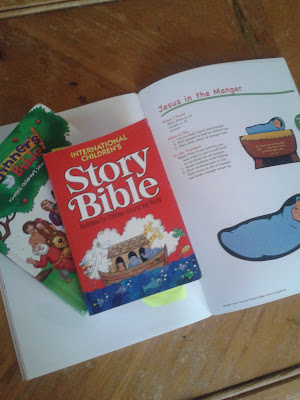 The pictures in the Beginner's Bible are really cute but the stories are very short. This is probably best for very young children that don't have much of an attention span.

The International Children's Bible has pictures submitted from children around the world..some of the pictures really made my older kids laugh...but the stories are a little longer. 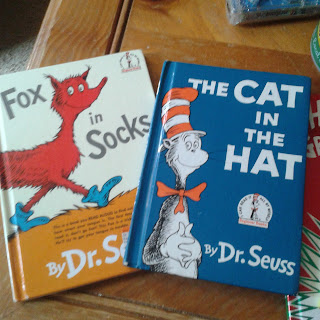 Fox In Socks & The Cat In The Hat (both by Dr. Seuss)....I don't believe any description is necessary here. hahaha 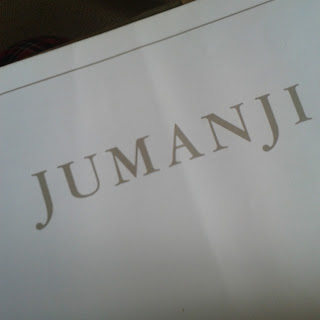 Jumanji (Chris Van Allburg)...This is quickly becoming one of my little adventure-loving boys' favorite books! They are completely engrossed by the illustrations and the storyline. I realized, after reading it, that the movie really did go on it's own wonderful tangent...and wish more of that was in the book. But, all in all, my boys really love it. 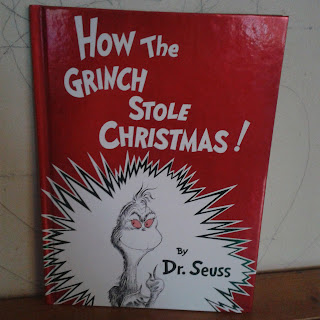 How The Grinch Stole Christmas (Dr. Seuss)....Another Dr. Seuss classic. We got the kids this book and gave it to them a couple of days before Christmas...and they've been having me read it at least twice a day. Sometimes several more times than that. They know all of the words by heart and are always discovering something new in the illustrations to remark on. The latest thing that they are intrigued by is the fish in the Who's refrigerator. 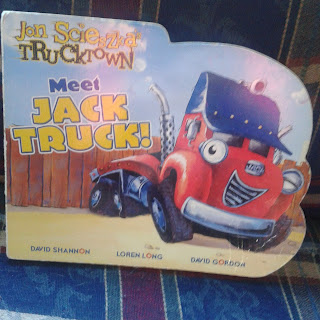 Meet Jack Truck (Hunter McKown & Jon Scieszka)....I believe this may be based on a television series?? ...but I'm not sure. Levi thinks the illustrations are pretty cool and he likes the big trucks in it. It's a quick easy read boardbook... I wasn't too fond of the monster truck with the bed chamber on his head...and it kind-of threw my boys off, too...but other than that, they like the book. 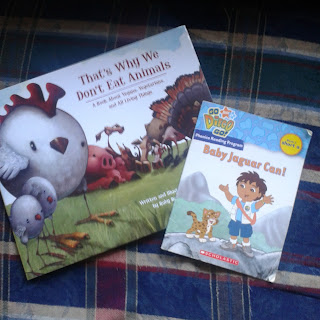 Go Diego Go! Baby Jaguar Can! (Quinlan B. Lee)....My boys also love the animals that Diego features in his books. This book comes from a boxed set that I bought MANY years ago (I think from Avon?) when I was teaching my eldest son to read. The book encourages the kids to get up and "jump" or "run like a jaguar" or clap!clap!clap! They love it.

That's Why We Don't Eat Animals (Ruby Roth)....Santa brought this awesome gem and it's quickly become a family favorite. When I first saw it, I had my doubts as to whether the boys would like it that much or if they would find it too sad. But they adore it. It's also high up on their list of favorites. The illustrations in this book are beyond amazing. They totally bring the book to life! Whether your child eats meat and/or animal products or not, I think it's still very important for children (and adults!!) to know exactly where their food is coming from, so that they can make informed decision. 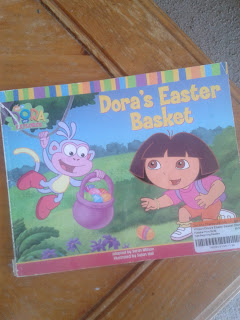 Dora's Easter Basket (adapted by Sarah Wilson).... As you can see, we really don't limit holiday/seasonal books to their "appropriate" time. I think it's a good idea for them to understand holidays before they happen....and what better way than through reading about them, excited about them, all year long? This book actually helped to solidify Levi's (3 years old) counting in Spanish. He's getting really good at it and can count, almost completely unassisted, all the way to 10 in Spanish! 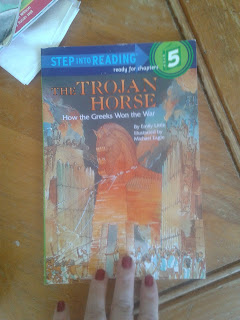 The Trojan Horse: How the Greeks Won the War (Emily Little)....I thought that this book would be too advanced for my littlest guys. It was pretty text heavy for a 3 and 5 yr old....but they were sucked into it. Even my older two kiddos were on the edge of their seat in the next room, listening in awe. My almost-15 year old said that wants to go buy Homer's Iliad and read more about the whole thing! Truth be told, I'm buying myself a copy, too!! haha This was a great book that explained it all very simply and my kids all loved it. 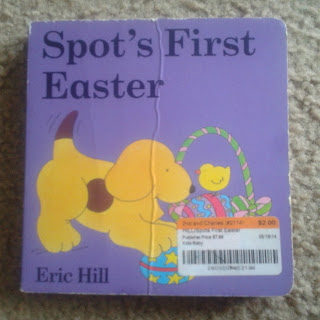 Spot's First Easter (Eric Hill)....This is a cute little lift-the-flap board book. My boys like how the Easter Bunny is hiding on every page, watching Spot and Helen look for the eggs that he hid. It also sort of teaches numbers 1-6...but they don't have the kids count the numbers specifically, which I dislike. It just tells them something along the lines of "oh, I hid 6 eggs" and later "you have to still find 3 eggs"...but the kids can't really physically count the number of eggs in the baskets like they can with the Dora Easter book. 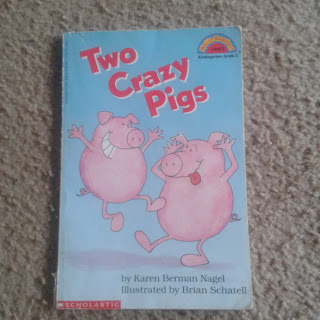 Two Crazy Pigs (Karen Berman Nagel & Brian Schatell)....This book has really cute illustrations. It's a little goofy for my taste, but my boys love it. Levi has asked me how he can get into the book to go play with the pigs. Austin wishes it was a television show, so that he can see the pigs in action. 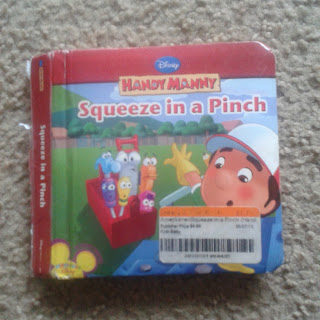 Handy Manny: Squeeze In a Pinch (Disney Press).... This has been one of my boys' favorites for years. It's just a little board book. I think they like the little accent/voice I do for everyone. It has been so well-loved, however, that the back cover has fallen off.

Well, I think that's pretty much what we read during the month of January!

My littlest boys adore books and are always begging for stories, even if it's the same book for the 12,000th time that week. Moms of toddlers/preschoolers get what I'm saying. hahaha

What have you guys been reading lately? Anything good?

So, let me know down below or on Facebook if this is the kind of things you like to read about...what books we read each month. I was also thinking of doing a monthly "What We Watched", too.... Thoughts??
Labels: books homeschool reading what we read