My Undetected Pregnancy...Or A Major Misdiagnosis

In 2001, after the birth of my daughter, I opted to go with the Depo shot as birth control.

No one talked about the bad side effects with me. My doctors didn't even say a thing when I gained 60 pounds in under a year. I just ballooned up. No one said anything when I began having irrational mood swings and severe anxiety attacks. I was diagnosed with post partum depression (PPD) and bipolar disorder and admitted into an outpatient program to deal with my mental issues. And, of course, put onto more medication.

Eventually, I realized, way before I ever had the internet and Google became a doctor for many, that something just wasn't right. I had to stop this. I didn't NEED to be on all of this medication. No, something was wrong.

So I stopped them all, cold turkey. Even the Depo shots.

Now, this isn't a discussion or recommendation on quitting medications that have been prescribed to you. That is your own call and should probably be discussed with a medical professional before you make any rash decisions. I was impulsive and irrational on many fronts and just stopped it all. And it was, IN MY PARTICULAR CASE, one of the best decisions I ever made.

Turns out, I believe that the Depo was causing pretty much all of my problems.

That last part didn't seem normal to me. At all.

So I took a home pregnancy test. Negative.

Took another one. Negative. 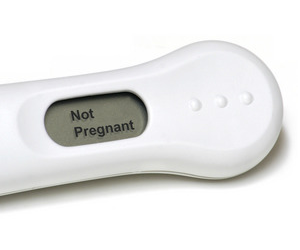 I made an appointment to go to my family doctor, an office that I had been going to since I was a baby.

My doctor gave me a urine test and told me that it was negative. She did a physcial exam. Like, feeling my cervix to see if it was closed tightly. She commented that my cervix was tilted but that I was definitely not pregnant.

I found out that doctors can do blood tests to determine pregnancy and decided that I wanted to have one done. I called my doctor and made another appointment.

Went in and took another urine test. Negative. (big surprise, right?) My doctors firmly tried to talk me out of a blood test. It was ridiculous to need such a test when I was clearly not pregnant. What were my symptoms again? Oh, here, here is a prescription for thyroid medication. Surely that is what is going on with your body. Let's give you some medication with no testing. But I still stubbornly demanded that blood test.

I went home with the thyroid prescription and told to fill it soon.

But I held off. I wanted to wait until I heard back about my blood tests.

Back then, we didn't have a phone. I would have to drive just outside of my neighborhood to a pay phone if I needed to use the telephone. (anyone else remember those days?? haha) I waited however many days they told me it would be to get the results and then drove, early in the morning, to the payphone. When I called the office, the receptionist told me that the doctor wasn't in yet. That she couldn't give me my results, it had to be approved by my doctor first. Ugh...come on!! I was sitting there on a pay phone...are you sure? You can't tell me anything?! She assured me that she could not tell me anything...except....wait....there was a note. The doctor had attached a very important message to my file: do NOT continue taking thyroid medication!!!! The woman then backtracked a bit and said, well, I think you have your news, don't you? Congratulations.

Yep. I was pregnant. I gave birth to a beautiful healthy baby boy later that year. My Christian.

That is when I began realizing that, you know what?, I know my body better than anyone else. Even doctors. I've lived with it for 22+ years, not them (now, I'm up to 35+ years haha). If something's not right, you need to go with it and figure it out. And if the diagnosis doesn't seem right, well, you do what you need to, to find out the answers you need. Because this is your life. You are the only one responsible for it. If you need to get a second or third opinion, go for it. Until you find out what is going on.

Because who know YOU better than you?
Labels: depo provera misdiagnosis pregnant