Alright. Tell me I'm not the only one.

Who else is getting into this little 6-episode mini-series X-Files?? 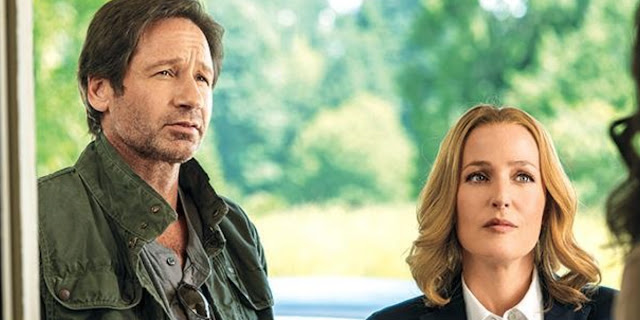 We missed the first episode, which apparently aired back in December.
(We don't watch a lot of cable...we're mostly Netflix/Amazon/Hulu people)

But we watched the 2nd and 3rd episodes....and we are REALLY liking them!!!

They are, in my humble opinion, much scarier this time! And...dare I say? To me...a conspiracy theorist at heart...much more believable than the previous seasons. I mean, not totally believable, exactly...but still.

The story lines are more believable (so far) than old episodes.

What about that girl who claims that the government is impregnating women (or at least just her?? I don't know...I was typing up lesson plans) with alien babies and then stealing the babies via c-sections.

And the alien DNA that is in Scully?!

What about that little girl that was breathing underwater?? Creepy!

Also...am I the only one who didn't realize that Fox and Scully had a baby together?? Maybe I didn't watch all of the old episodes...I need to go back and check. (See? Reason #8754 why I love Netflix.)

Side note: I always thought that Fox looked a lot like my grandpa when I watched old episodes...but watching these current episodes, even my kids are yelling "Hey!! That looks like Papa!!" hahaha

So, tell me, are you watching this little X-Files mini-series?

How do you think it compares to the original seasons???
Labels: family time favorite tv show x files