Is Black Mold Hurting Me?!

I don't mean to brag, but I live a pretty healthy lifestyle.

Yes, I took a break from it all for about 6 months and was eating junk food, take out and cooking meat (poultry), using dairy in my recipes, etc for about 6 months...but I'm getting back into the way I was living before.

Before things started falling apart and I just sort of gave up on my health for awhile.

I've been pretty quiet about this whole thing and didn't really mention it to many people. I honestly hate whining...and, believe me, my chiropractor and husband and kids have been hearing A LOT of my whining over the last year...mostly in the last 8 months or so.

It started with my miscarriage. Which I chalked up to my IUD (Paragard).

Then I was diagnosed with 3 ovarian cysts...my gynecologist said that it was likely caused by a hormonal imbalance.

Then I began getting swollen lymph nodes in one underarm.

But I was dealing with all of that...castor oil for the lymph nodes (which went away quickly after the castor packs), castor packs, the Pill and detox tea for the cysts...

They all went away.

My hands and feet were randomly going numb-ish/tingly.

My chiro feels that the tingly hands/feet are due to an injury in my neck.

Then, about 3 months ago, I started experiencing a sort-of brain fog. It started out being a couple of times a day it would hit...but it has progressed to being an all-day occurance. It's like I'm a little buzzed (mildly drunk) but I'm not. That's the best way I can describe it. It's just weird. Not exactly dizziness or vertigo...but almost at times. Sometimes I'll have waves when it hits me and my brain gets really foggy and I kind of get lost in conversations.

My ears were also hurting and I was feeling a lot of pressure in them. I treated them with garlic oil and oil of oregano and the pain went away.

What seem almost like panic attacks will hit randomly.

Chronic fatigue has settled in on me...I don't want to get off the couch. I am constantly tired. Like, tiiiiired.

I will have random allergy attacks out of nowhere.

My asthma is acting up really bad, which is unusual.

My menstrual cycle is out-of-whack for unknown reasons.

I have trouble concentrating on my kids' school work sometimes and occasionally don't know how to explain things to them....not that I can't find the words but that I just can't figure out the things myself. It's just WEIRD.

I know that I keep using words like "weird" to describe these things...but I am at a lack of a better word. It is all just seemingly random and weird.

Then...add in my husband's shingles he got this past Spring. He is a strong guy with an amazing immune system....but he got them and the doctors all said that his was the worst case they'd ever seen. They took photos of it. Typically, shingles only affect one area (your nerves are mapped into certain "areas")...but his were in lots of the areas...and had actually crossed over to the other side of his body. Very rare for shingles.

One of my kiddos and myself keep having cold sore outbreaks...bad ones and worse than usual.

Nightmares and really strange dreams have been plaguing us lately.

I'm waking up in the middle of the night for no reason and not able to go back to sleep.

Christian has been having horrible migraines.

Austin has been itching his eyes so much, he's leaving scratches on his eyelids.

Then I heard a thing on the radio about a local woman who was diagnosed with chronic fatigue, fibromyalgia and a myriad of other diseases...before they finally realized that she had mold in her home that was basically poisoning her.

Hmmm....a lot of the things that she was going through sounded like what we are going through. So I tucked that little nugget in the back of my brain until I could figure out my next step.

Then, about a week ago, we watched an interview with Suzanne Somers. She was discussing her new book, Tox-Sick and how many problems that she and her husband encountered...HORRIBLE health issues...when they had moved into a rental after their house had burned down. The big thing that hit me was her saying how much it confused them, how unhealthy they were, despite exercising and eating an extremely clean and healthy diet.

Then they found out that they had black mold in their walls.

I am convinced that this has to be our problem.

We live in a trailer, which I've heard are prone to getting mold, particularly black mold. And that black mold thrives in the South (we live in Atlanta) due to the humid environment.

The house has always smelled musty. But I just thought that's how trailers smelled. I would just plug in a million oil air fresheners and you'd barely notice the...musty aroma.

We have *some* black mold growing in our windows...which I have heard is not necessarily a bad thing? Possibly not real mold? But when I compare pictures of black mold to what is on my window, well, it looks pretty similar, just not as bad... And who knows what's inside our walls and under our floors... What do you think? Do they look similar? 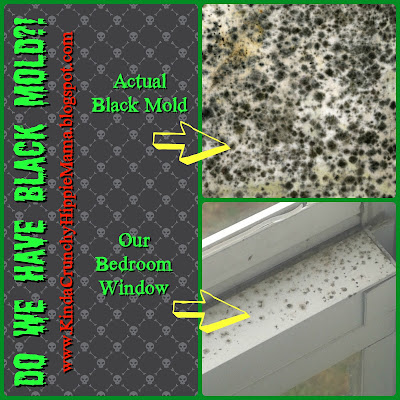 But then I started researching it. EVERY SINGLE SYMPTOM that we have can be the result of mold poisoining! EVERY SINGLE ONE. The mold expert websites asked "Did you have a water leak within the last year before your symptoms started?" YES, WE DID!!! Our dishwasher had busted and we have NO clue how long it had been leaking from the back before we had discovered it. We had cleaned it off of our kitchen floor, where we could see it, but never pulled the dishwasher out and cleaned behind it. Our toilets' pipes, we found, had also been leaking under the floor for who-knows-how-long before we discovered it. Again, we never went under the trailer and got up into the plastic that coats under trailers and cleaned it. Our shower wall had a few small cracks/holes in it when we moved in (this is a rental) and I'm sure that water went down in those during our showers. Again, we never did anything about any unseen water.

DO WE HAVE MOLD?!

We don't want to report it to our landlord just yet because we have nowhere to go if we have to leave. We have 4 kids, 2 dogs, a cat and a bird. Our credit is not the greatest. We are self-employed this year, so we have no "proof of income paystubs" to show a rental office and this is the slow time of the year, so their wanting to see our bank statements isn't going to work because we are literally just keeping our heads above water during the slow time of the year. We can afford rent, no problem...but property managers (which are all the rage for people renting out their properties down here) won't give us a shot with what our current income looks like.

We can't live in a hotel because of all of our pets.

We have no one that can watch the pets. (our dogs are not very receptive to new people)

I'm not getting rid of my pets.

WHAT THE EFF AM I GOING TO DO?!

We are praying like crazy that we're able to come up with a workable solution....

Keep us in your prayers or send us positive thoughts and wishes!! We can really use them right now!!