Getting Rid of Lice Naturally | Pt. 4

If one phrase could sum up how I'm feeling about recent events, it would be:

Today, while I was running my fingers through Levi's hair...I discovered that HE has lice.

I mean, I know that it was inevitable...but still...GIVE ME A BREAK!!

I immediately herded him and Austin both into the bathroom and soaked their hair with the Fairy Tales lice treatment foam that I had left over from my own bout with the little critters. 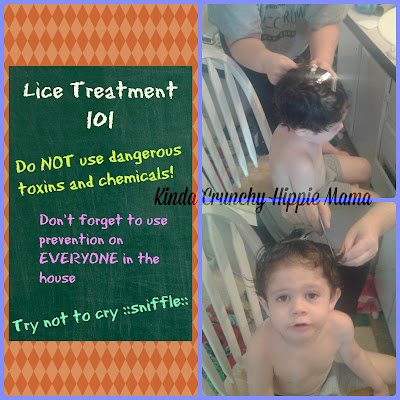 Even though Austin wasn't really showing signs of lice, I just wanted to be safe and treat him, too.

The combing out process was pretty quick for them....Levi had them really bad, though. I *might* have found 2 on Austin, but wasn't sure that they were actually lice or nits...they were just tiny specks. But, like I said, I just wanted to be safe. And since they are toxin-free and all-natural, I wasn't putting them in any danger by treating them proactively.

Immediately after their comb-outs, I washed their hair with the Fairy Tales Repel shampoo. I hadn't washed their hair with it over the last week. I don't know why. They take baths in a different bathroom than we shower in, so maybe it was just my being lazy and not wanting to walk to the other bathroom and pick up the bottle of shampoo? Who knows...for whatever reason, I didn't do much prevention on them, so I was really just asking for it.

On the other hand, Mahri and Christian have been using the FT Rosemary Repel shampoo and conditioner and they still seem to be lice-free. Thank God!

Well, that's my Sunday....hope yours was better!!