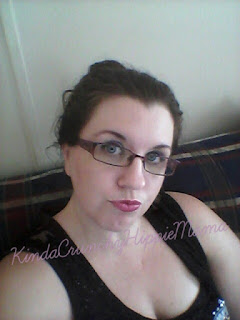 I went to the chiro's today. They told me that I am at the halfway mark of our treatment plan, which is a total of 16 weeks, so far, as long as my body responds well to the treatment. So we're at about 8 weeks now.

So they did another evaluation of my range of movement and weight distribution, body alignment...all that jazz. But I won't get the results until next week, after the doctor is able to review them. The intern did mention that I'm still carrying extra weight on my left side but not as much as before.

I didn't take any pictures there, like I did for my last evaluation, because they didn't leave me to my own devices or alone in the room. ha ha ha The doctor or the intern was with me the whole time...and it would have been kind of awkward to ask either of them to take pics. ::wink::

The little boys are really getting into Legos lately. AussieBear has been creating dinosaur/Jurassic Park-themed inventions. Levi just randomly plays with Lego characters. 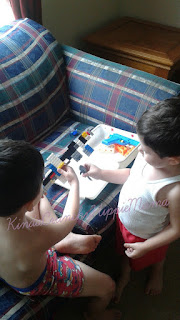 Mahri's computer seems to have crashed or something and I've been trying to get it back on track without doing a factory reset, which would erase all of her pictures and stuff. She had pictures of Chowder (her guinea pig that passed away a couple of weeks ago...you can read about that here) on her computer and I really want to salvage those, if possible.

But our computer has been looking like this since yesterday: 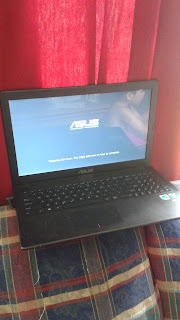 It just said that it's "repairing disk errors"...whatever that means. It also says "This might take over an hour"...which, after over 20 hours of looking at it, I can attest to!

Trying to take silly selfies for Facebook and Levi stuck his hand in front of the camera right when I took the picture. My silly little photobomber! 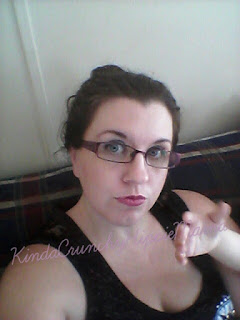 I am sitting here, waiting for Antonio to get home. It's supposed to be Date Night and I am STARVIN' MARVIN!! Can you hear my tummy rumbling??

I think we're going for Mexican (I think that's all we ever go for..ha!) ...but at this point I feel like I'd probably be happy eating one of his work boots...

It has completely zapped my energy and good vibe.

I don't even want to go out. So I called Antonio and canceled Date Night.

We'll see if he tries to talk me into it. But he's still apparently at the job site and who knows when he'll be bringing dinner home. It's 7 pm. I am STARVING. I hope he comes home soon.

So he called to see why Date Night was canceled. He talked me into still going out. Well, technically he just asked "What's going on?? Why did you say you didn't want to go out??" which I took to mean that he was actually begging me to go out and have a nice time. So Date Night is back on... ha ha ha (see? who said wives can't read their husbands' minds?? ha ha) I can't wait to go eat!!

So he just got home with the kids' Happy Meals...but they forgot to give him my fries that I had asked for to hold me over until dinner. I haven't eaten ANYTHING at all today. I had an iced coffee (homemade). That's it. And, seriously, McD's wants to forget my fries?! AND they think they deserve $15/hr?? Ummm...no.

I am just going to die right here of starvation while he showers and gets ready to go out. ::FirstWorldProblems::

We went. We ate. We conquered!! Muahahaha!!

Okay, so maybe that's a bit dramatic...but the important thing is, I ATE!!

One small chile colorado taco and some chips with bean dip and salsa later...(no joke) and I was full.

I wish I would have gotten some pics of our night out, but seriously, that didn't even cross my mind.

But we're home now and getting ready to say prayer with the kids and give lots of hugs and kisses and head to bed. But I'll leave you with one final picture of Antonio and I as we were heading out tonight: 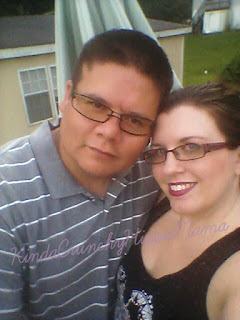 Have a wonderfully beautiful weekend!! Enjoy your loved ones and eat lots of tacos!!

PS...as soon as we sat down at our table at the restaurant, a little boy (about 3 or 4 yrs old) came over and spit on Antonio. I was too busy with my chips and salsa to care much... hahaha