After a month of being cooped up with different cases of shingles and chickenpox, we were finally able to get out yesterday as a family and have some FUN!!

After we dragged the poor kiddos to the prerequisite farmers market and grocery store, the day was ours, baby!! Freedom!!

We got stuck in traffic. A lot.

But we finally reached our destination:

We had so much fun!!

We let the big kids go play on their own and let the little guys pick which parent they wanted to hang out with.

The options were limited for Austin.

But he still managed to find a loophole...and picked Christian as his playtime buddy.

So Mahri felt sorry for dear old Mom and said that she'd play with me.

::sticking my tongue out at Austin::

But then Christian decided to play some games that Aussie couldn't reach and so, by default and having no other choice, Austin decided that I was way cooler to hang out with and we played together the rest of the evening. They had this one really neat game where you sit inside of it, like a Jeep, and it's like you're on something like Jurassic Park and you shoot all these huge bugs and creepy crawlies. I was screaming and laughing louder than any of the kids.

Cuz I'm cool like that. And that's how I roll.

Then we met up with Levi so that he and Aussie could play some games together... 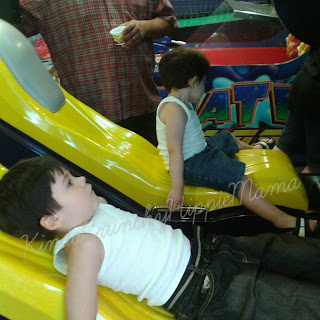 They were actually quite bored with this self-proclaimed action-packed adventure where it simulates all sorts of crazy and wild rides.... The boys, however, were bored.

I'm pretty sure they were thinking "This ain't nothing. Just try riding with Mama when she's running late for an appointment...." haha

After a few hours there, we decided to hit the road and pick up some yummy (and completely unhealthy) take-out to take home and eat while watching a surprise movie that I had rented from RedBox. Pizza, wings and DQ it was...if you follow me on Facebook you know how excited I am for their having Cotton Candy Blizzards back for May!

Unfortunately, the day's excitement took it's toll on Levi....who puked EVERYWHERE inside the van on the way home. We had to pull over on the side of the highway to get him undressed and clean up his carseat a bit. Poor guy. He promptly fell asleep as soon as we got home and I washed him up and he woke up just fine this morning, so it must've just been a fluke.

Sadly, he missed the surprise movie that I had rented for the kids...

That was such a cute movie! I think we're going to watch it again today.....

So that was how we spent our first day of freedom...haha...what did you guys do yesterday?