Wow...this past week has yielded an interesting discovery along with much frustration.

But this requires a bit of explaining. See, I began introducing carbs back into my diet.

Some of my Diet Buddies had already warned me how I was bound to gain back a few pounds once I did that but it was still disheartening to see the numbers rise back up to 175 on the scales. I almost threw in the towel, to be honest.

But then I really started thinking of my friends' advice. And it hit me. Of course my body was going to cling onto every gram of carbs. It was a shock to my detoxed system. It needed to grow accustomed to accepting the carbs into my system & then burning them off...not turning them into fat!

So I stuck with it & continued exercising.

And you know what? The pounds suddenly dropped while I was sleeping! I woke up the other morning & I had dropped the five pounds!!

Big Surprise #2: I had noticed that the occasional (yet horrible) stomach pains that I had been experiencing over the past 20-something years had disappeared during Phase 1. It had been diagnosed as spastic colon (IBS) when I was a child & so I just suffered through it.

I thought that the sudden influx of vegetables into my daily diet would flare up my stomach problems. But I was wrong. I had not one issue at all.

Until I began eating bread again. Then it came back with a vengeance! I figured that it was just my body getting reacquainted with digesting carbs because my husband (who is dieting with me) got pretty sick after his first P2 carb, too.

But his illness was just that one time. Mine came back every time I ate bread products. And the pain was much worse than my pre-South Beach IBS pain. This pain is horrendous & nothing was easing the pain away. I just had to wait it out.

That's when it hit me: my body cannot handle gluton (a protein found in wheat). I'm not sure if its a full blown intolerance, known as Celiac Disease, or what. I researched the signs of Celiac Disease & every symptom on the list is what I experience when I eat bread products.

My detoxing it all out of my system during P1 probably heightened my sensitivity to it & worsened my pain. My mom said that ever since I was a tiny baby, I've had terrible stomach pains & cried a lot.... I wonder if this is what its been the whole time.

So I am going to be buying myself an arsenal of gluten-free bread products & see what happens.

I heard that difficulty losing weight is another symptom, so that will be great if I can lose a bunch more weight in addition to stopping my pain.

I never imagined how life changing this diet was going to be.... 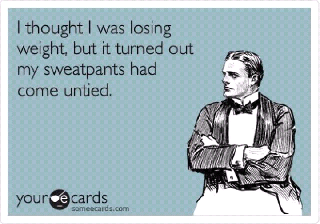