It's Too Early For This

So I was sitting in the quiet living room this morning & enjoying what little Me Time I had before all the kids woke up.

Turns out it was VERY little. I had no sooner settled my sleep-deprived butt on the couch than here comes an eager Mahri scurrying into the living room. She plopped on the couch & stared at me.

Now, you know how they say 'An elephant never forgets?" (or was that just something Dr. Seuess made up??) Well, an elephant has NOTHING on a child.

After a few minutes of her staring at me in unadulterated excitement, I had to ask her....

"For what? You ready for breakfast already? Your brothers are still asleep."

"Nooooo....remember? You said that I could exercise with you if I got up with you."

I had forgotten. Granted, I had just made that promise yesterday, but still... I *had* planned on starting a daily exercise program to: a.) lose this baby weight and b.) prepare myself for the Zumba classes I'm wanting to take.

Fine. I'll do it. I'll get off my LAAAAZY behind & exercise with my daughter. But before I can even load the Crunch video on NetFlix, Austin wakes up.

Oh, no no no...he is not gonna stop this. I need to lose this weight. I am not allowing him to stand in my way! While I settle him on the couch, Mahri & Christian (who has also miraculously awakened) grab him his milk & some Cheerios.

I load up the Crunch dance cardio video. Figured it'd help my two-left-footed self be better prepared for Zumba classes.

Sixteen minutes into the video, I reached several conclusions:

a.) exercise is probably much easier when a toddler isn't attached to your right leg,

b.) tripping over the baby swing on my left side reveals that my tiny living room is not nearly large enough,

d.) my asthma is nowhere near as under control as I thought it was,

e.) I cannot even remotely keep up with Miss Perky Boobs and her spindly legs on the tv,

f.) Zumba class will kill me.

I had to give up halfway through the video because Austin would not detach himself from my body.

Mahri finished the video while I swear Miss Perky Boobs was shooting me "I told you so" looks from my television.

I'm ready for my coffee and a waffle.... 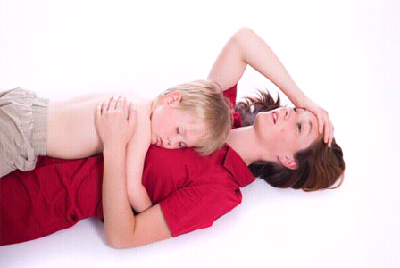