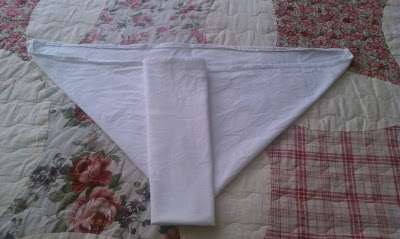 One just peepee & the other one had poopy, too.

I have come to a few conclusions:

a.) Snappis don't work so well with flat diapers. In fact, the little grippy teeth went THROUGH the material & was poking him. And it hurt him!

b.) Diaper pins, though they fasten it better & more efficiently, hurt like a MOTHER when you jam it into your finger!

d.) Poop is not so hard to get off of a diaper! A few little shakes & PLOP! LOL

I just wish I could get Austin's diapers to look as cute as the ones I see in pictures and tutorials!

Ultimately it doesn't really matter how cute it is since its under a diaper cover anyway. All that really matters is that it absorbs & holds in what its supposed to.

But I am a perfectionist & want it to look good, inside and out.

Lucky for me, I'll be getting lots of practice! ;-)
Published with Blogger-droid v1.7.0
Labels: diaper pins poopy diapers Snappis

Tara West said…
I chimed in on your other post about prefolds. But you can actually look up a "pad fold" for the flats too and they are super easy. No pins or snappi required. Just lay it in the cover. Painless and easy.
August 18, 2011 at 11:45 PM

Monica said…
I'll look it up! Thank you! For ONE of the changes he laid still & I snapped on the pins, lickety-split. LOL I was so proud. And so when my husband came home, I proudly marched myself & our little diaper-clad man back to the bedroom & told my husband he *had* to see what I could do. Ha! Suddenly I had Mr. Wormy Squirmy on my hands. LOL So I'm definitely looking up the pad fold! Thanks, Tara!
August 19, 2011 at 8:00 AM