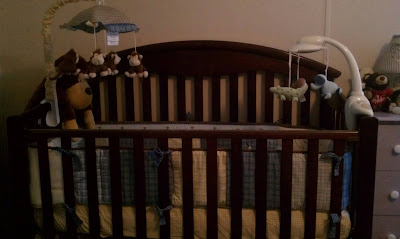 I feel like I have betrayed my 8-month old son. And what's worse, he doesn't mind!

The betrayal: I got him a crib. And I put him to sleep in it at nap time & bedtime.

My motivation: I'm selfish. He is the cutest little bed hog, but a bed hog all the same. If he feels that I am encroaching into his nocturnal domain, he gently lets me know. With a punch to the face and repeated kicks to the stomach.

I'll be honest. Though my goal was to exclusively bed share with him for at least a year, I cheated a bit.

(haha, I say this like my husband had no choice in the matter. But he was all for bed sharing from the get-go. He backs me up 110% on almost all of my parenting choices. Though my telling him that if he so much as grumbled a complaint, raised an eyebrow or even thought of questioning my decisions would result in my taking the children & escaping in the dead of night may have had some bearing on his everlasting approval. Especially since he's a deep sleeper. Heeheehee)

Anyway, like I said, I cheated. I set Austin's bassinet up right next to my side of the bed. That way, I would put him in it at bedtime & would usually bring him to sleep with me after his 5 am nursing session.

But here's the thing. Babies grow. They're not like fish who stop their own growth according to however big their aquarium is, so as to live comfortably inside. Nope. Babies grow. Quickly. Once my little guy started propping his feet up on the side of the bassinet to sleep, I knew the inevitable would have to take place.

We found a beautiful crib. It was cherry, like our bed. I already had the crib bedding. It was all fitting in nicely.

So we brought it home & propped the pieces up against our bedroom wall. And left it like that. For almost a month. I'd love to say that we were so adamantly opposed to this baby-proofed monstrosity that we couldn't bear assembling it a minute sooner than we did.

But the truth is we are just lazy.

After he was rescued & sent me subliminal "you are the world's crappiest mother" messages, I called my husband, sobbing, and declared that the crib either got put together that night or else I would be forced to find better parents for little Austin.

By "better parents" I mean "highest bidder on ebay". Hey! I couldn't let the whole ordeal be a total loss. ;-) (I am so totally kidding! I would NEVER do that! ......Ebay has changed their seller's policy & would want too big of a percentage of my sale...)

So now the crib is up. We hooked up the mobile that goes with the bedding PLUS his mobile from his bassinet. We thought the familiar touch would help him to hate us a little less.

I'm happy--and sad--to announce that he has spent every night in his crib with nary a complaint.

I think its harder on me than it is on him. He feels so far away. I miss him snuggling up next to me. Sort of. I don't miss his fist in my eye at 2 am. I enjoy being able to stretch out without worrying that I'm going to fling him across the bedroom.

And he is sure taking advantage of all the space he has now. He's all spread eagle in there.

But then I just saw this baby shirt that said "Cage Free Baby" & I wanted to strangle myself with a crib sheet.....