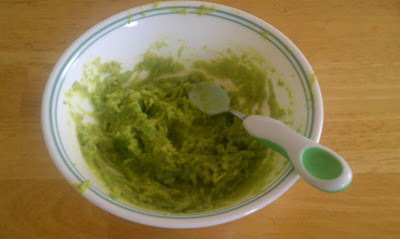 Today I attempted to make Austin homemade baby food for lunch. I had bought two avocados at the Farmers Market for the specific purpose to mash it up for one of his first homemade baby foods. After all, the avocado farmers are raving about how it makes a great first food for babies. I figured, hey, let's give it a go!

Well, first off, I have NO CLUE if I was supposed to steam it first. I just thought that steaming fruits & veggies for baby food was just to make it soft enough to mash up. This avo was just perfect to mash without needing steamed. So I just scooped it out of its.....shell?....into a bowl & went to town on smooshing it. It was of the consistency of guacamole, more or less, so I figured it was go time!

With great ceremony, I brought Austin into the kitchen & got him all settled into his high chair. I made a big show of continuing to moosh the avocado in front of him. Hey, I wanted him to know that THIS was the start of something special: a great culinary journey that I would deliciously guide him on. I had visions of being the Julia Childs of baby gourmet. Every baby would beg to eat my offerings of pureed goodness.

I looked Austin in the eye & told him what the Lunch du Jour was. His eyes grew wide. I'd like to think he was extremely impressed at my dedication to being World's Best Mommy.

The rest was like a scene from a horror movie. In what I can only describe as cinematic slow motion, he opened his tiny mouth. He trusted me completely. And what did Mommy of the Year do? I VIOLATED his teeny taste buds with the most vile substance known to man! I mean, this kid thinks its hilarious when our Rat Terrier sticks her nasty tongue in his mouth. He's not picky, ya know?

He made the most horrified face & promptly started gagging. It was like his stomach was trying to escape via his mouth. He was gagging & had smooshed avocado running down his chin. I dropped the spoon & began wiping his mouth out with a paper towel. I felt horrible! What had I done?!

So I did the only thing any normal parent would do: I put another spoonful into his mouth. I figured that first bite was a fluke. It couldn't be that horrid. Let's give it another shot.

And you know what?

Apparently it WAS that horrid because he did the same horrified-face-gaggy-mouth thing all over again.

So I dumped the contents of the bowl into the trash. I opened my cupboard door, defeated, and took out a jar of Sweet Corn Casserole baby food & settled down on the chair next to him.

God bless my little chick: he opened his mouth right up. No suspicions or grudges. My transgression had been, not only forgiven, but also forgotten.

Moral of the story: I think that I'm going to research this whole homemade baby food thing a bit more before trying it again! LOL
Published with Blogger-droid v1.7.0
Labels: death by avocado homemade baby food