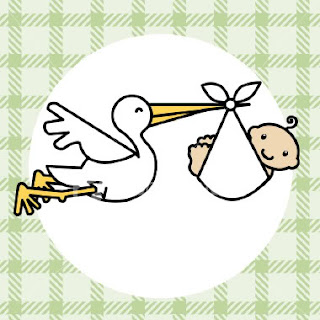 We have just found out that we are expecting Baby #3!! Yay!!

Antonio & I have been joking a lot lately about getting pregnant. I made a comment the other day when I was sitting at the kitchen table munching on a cinnamon roll and a bag of BBQ chips at the same time. But I still figured that it must be pre-menstrual cravings.

But last Friday I started to really wonder. I was late by several days (actually orignally, I miscounted & thought that I wasn't due until the next day). I was eating a bowl of Special K w/Strawberries while also munching on a bowl of cold stuffing. Then the water-works started. I cried about everything. Seriously. I ate a piece of pizza and then cried, but I couldn't tell you why.

So we went out and a bought a couple of home pregnancy tests....and they both said positive! We told the kids & they were elated!! But the next day when we checked the tests, the "+" mark had disappeared!! The kids started freaking out, "Did the baby disappear, too?!" Which by anybody's standards was a ridiculous question. Unless that "anybody" is a pregnant woman. So I started freaking out, too.

Yesterday I began experiencing mild morning sickness. In the afternoon. Anyone who's ever been pregnant knows how that goes. How they got the term "morning" sickness is beyond me....

So we figured that we'd head to the doctor's office for a hospital-grade pregnancy test. As I sat in the back room, I was nervous & getting all clammy. What if I had just imagined the whole thing?? What if I was sub-consciously making myself nauseous?? I had recently taken some new medicines, maybe they had just made me late. What was I going to do when the nurse came in and told me that I wasn't pregnant? Suddenly I felt ridiculous. Why did I have to come in so soon? I should have waited another week or so....

Footsteps in the hallway.

I gripped the seat, waiting for her to tell me that I had completely lost my marbles & was not even remotely pregnant. (as if there is such a thing as 'a little bit pregnant')

She came in, double checked her chart....and then smiled at me. "Congratulations! You're pregnant!!"

I started to cry as she gave me my EDD (estimated due date) of December 1st.

I gave her a hug & then went out to the waiting room to tell Antonio and the kids the great news. Our family is growing!!